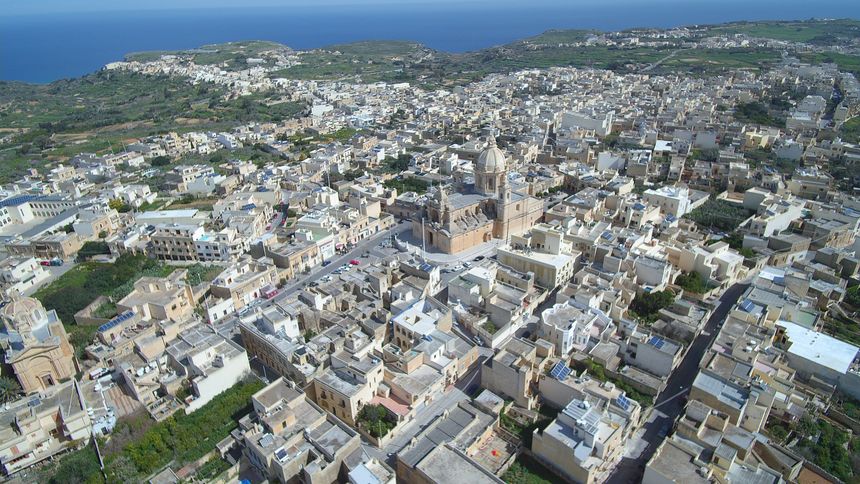 Nadur is a town that is perched on a plateau on the eastern side of Gozo – an island in the Maltese archipelago. The name itself is a derivative of the Semitic verb nadar, which means to look out, observe or guard, hence the Latin ‘Vigilat’ which is Nadur’s motto. The plateau and its surrounding areas have been inhabited since prehistoric times.

Remains linked to human activity found in Nadur date back to around 3500 – 4000 BC. However, it was in early modern times that the inhabitants started clustering in the centre of the plateau. On 28 April 1688 Bishop Davide Cocco Palmieri established a new parish on the Nadur hill and subsequently Nadur earned its title as a new village.

Throughout the centuries, when Malta and Gozo were administered by the Order of St John, the French Republic and then the British Empire the population of Nadur increased exponentially from 410 in 1695 to 4001 inhabitants in 2016. The people of Nadur have traditionally been involved in farming, husbandry, fishing, seafaring and trade.

Nadur makes a name for itself

Nadur became famous for its top-quality citrus fruits produced in the fertile valleys of San Blas, Binġemma, Wied ir-Riħan and Daħlet Qorrot. Its people made a name in trade and seafaring during the Order of St John and the British periods.

Following World War II, when unemployment and lack of opportunities hit the islands, many Nadurins turned to emigration, reaching the four corners of the world to places, such as Australia, Canada, the United States, the United Kingdom and elsewhere in Europe. Today, the second, third and fourth generations of these emigrants still maintain close connections with Nadur.

From its fertile valleys to its breath-taking views, Nadur is rich with natural beauty and history. Places of interest include the Collegiate Basilica of St Peter and St Paul built between 1760 and 1804.

Being enlarged in the early twentieth century, this church is truly a marvellous place to visit. There is also the Sacred Heart Church, which is few steps away from the parish church, the Sopu Tower, a coastal watch tower built between 1667 and 1680 and the Ta’ Kenuna Tower, built in 1848 for communication purposes.

Dubbed ‘the village of the rising sun’ for its position in the East side of Gozo, Nadur is a tiny gem in the middle of the Mediterranean Sea!

Nadur is a municipality on the island of Gozo within the Republic of Malta bordering Qala, Għajnsielem, Xewkija and Xagħra. The total population is 4156 inhabitants as of 2019.

The town’s day to-day running is in the hand of the Nadur Local Council which was established in 1993 and seats 5 elected members including the Mayor. The Roman Catholic Parish dedicated to St Peter and St Paul, established in 1688, is a key player in the socio-cultural-religious life of the town.

Nadur’s total area is of 7.2km, which includes both the urban and the rural areas. The rural areas consist of valleys such as Ramla, Binġemma and San Blas, ir-Riħan, Daħlet Qorrot and ta’ Grejger, tax-Xħajma; garigues and promontaries, a tiny harbour and a sandy beach.

The urban space is divided into smaller districts, the larger ones being the town centre, San Blas, ta’ Ħida, tal-Ħali, ix-Xagħri, ta’ Grunju and Triq il-Qala.

Nadur day is celebrated on 20 November each year, the day which marks the establishment of the Local Council in 1993.

Since ancient times Nadur’s economy has revolved around three fundamental sectors: maritime, trade and agriculture. The Nadurins thrived during the times of the Order of St John, being involved in corsair activities and trade with nearby lands.

During the British occupation of Malta corsairing disappeared while trade increased. Several Nadurins found employment on merchant or military vessels navigating across the British Empire. Agriculture, husbandry, and other skilled work have also been very important since ancient times.

Following World War II many Nadurins resorted to emigration due to the lack of opportunities on the islands. During more recent times traditional sectors like agriculture and fishing have slowed down, even though the largest share of citrus fruits consumed in the entire country originates from Nadur. On the other hand, business (mainly small to medium) and tourism has gathered momentum.

Nadur today generates its economy largely through these two sectors. Lack of opportunities for modern professions such as IT, gaming, and areas of specialisation in more traditional fields results in many young Nadurins opting to live on the larger island, crossing over for the weekend to spend time with their families. 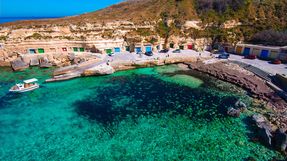 Daħlet Qorrot has traditionally been the local port used by many Nadurins. It is a tiny inlet characterised by many colourful boat houses dug directly into the rock. When the wind direction originates from the south or south-west then the sea is crystal clear, and swimmers may make use of its beach.

Nadur offers breath-taking scenery for country or coastal walks. The valleys of Ramla, Binġemma, San Blas, Wied ir-Riħan and Daħlet Qorrot comprise public streets and pathways which may be used for hiking. The Local Council installed several guidemaps and information for these country walks. A brochure with the best hiking trails is available and takes the Nadur main square as its starting point. 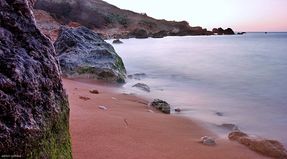 San Blas is a tiny, secluded beach famous for its orange sand. It is named after Saint Blaise, patron saint of the area for whom a small chapel, not far from the beach, was dedicated. The chapel, however, is no longer standing.

The Collegiate Basilica of St Peter and St Paul 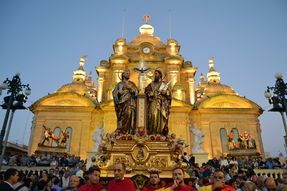 The Collegiate Basilica of St Peter and St Paul is a gem in the heart of the town. Constructed on the site of an older church between 1760 and 1804 and enlarged between 1907 and 1915, the church is truly the most spectacular building in the town and dominates the entire Gozitan skyline.

The cross which tops the elegant dome is the highest point in Gozo. Its exterior is monumental while the interior is lavishly covered in marble and paintings. The Basilica treasures the statue of St Peter and St Paul together with the remains of St Coronato, a patron saint of the town.

The Sacred Heart church lies a few steps away from the Basilica. It was constructed in the early twentieth century on the initiative of Rev Giuseppe Vella, a local priest, and inaugurated in 1910. The church, though small is enriched with beautiful paintings. 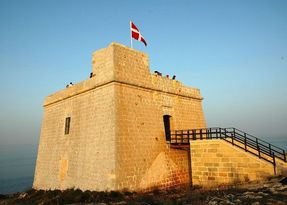 The Sopu Tower is one of many coastal watch towers built during the administration of the Order of St John between 1667 and 1680 to guard the north-eastern coast of Gozo from pirate attacks. Its construction was financed by the Università, or the local government of Gozo during the tenure of Grand Master Fra Gregorio Carafa.

On 10 June 1798, Napoleon Bonaparte’s army attempted to land in Nadur in order to invade Gozo. The Sopu tower, aided by the Ramla Battery offered resistance and opened fire on the mighty French Republican army causing some casualties to the invading force.

Napoleon’s army landed successfully, proceeded toward the centre of Nadur, broke into the parish church causing damage to its valuable treasures and then proceeded towards Fort Chambray and the Castle. The tower was restored by Din l-Art Ħelwa and the Nadur Local Council in 2006. 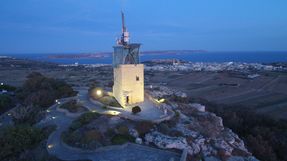 Ta’ Kenuna Tower and the nearby belvedere are situated on a very advantageous point, overlooking much of Gozo and the Gozo channel. The tower was built during the British occupation of Malta in 1848 during the reign of Queen Victoria and Governor Richard More O’Ferrall.

Its purpose was to be a semaphore telegraph station but not long after, in 1883, it fell into disuse and was left in a dilapidated state. The tower was restored by Maltacom and Nadur Local Council in 2005. Within walking distance is a belvedere looking over the Gozo channel offering spectacular panoramic scenes. 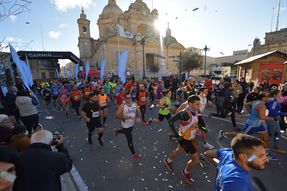 Nadur is a very active town. Its two most important annual events are the feast of St Peter and St Paul celebrated with activities, fireworks and bands playing on the 29 June and the preceding days. Nadur is also world-famous for its spontaneous carnival which stretches along for five days. Grotesque and creepy masks and costumes fill the entire square and main street of the town as it gets dark. An organised carnival takes place during the Sunday preceding the carnival in the main square.

In addition to these, the town holds a classic wine festival in summer, Halloween celebrations at the end of October and several other activities during the Easter and Christmas seasons.

Whilst wandering through the town streets, one may notice several interesting buildings which feature local traditional architecture. One imposing building is the Government Primary School in Racecourse Street, built in 1932.

Several old niches scattered around the town attest to the traditional religiosity of the people. Two beautiful examples are the Virgin of Ta’ Pinu shrine between Racecourse and St John Street and St Anthony of Padua’s niche in Wied ir-Riħan Street.