The written history of the city begins with that of Wallachia. It was certified as a market town and customs point during the reign of Dan II. Archeological sites belonging to Gumelnita and Monteoru cultures prove the presence of human inhabitants before the Christian era. During the Middle Ages, there was also a fortress of Buzău, but only a few passing mentions in foreign documents are kept.

In the 17th century, an era of war and foreign invasions began, that affected the town and its surroundings. They began with Michael the Brave's participation in the Long Turkish War and ended with the Wallachian uprising of 1821. Natural disasters (epidemics, earthquakes) also took their toll, leading to destruction and depopulation of Buzău. However, the inhabitants always returned and rebuilt the city, which led early 18th century local authorities to use the Phoenix bird on the city seal, as a symbol of rebirth.

The 19th century brought a time of cultural and economical development. The Communal Palace, the city's main landmark, was built at the time, after the city developed its industry and became a railway hub in the 1870s. Schools were open, and theatre plays were produced, the "Moldavia" theatre house was built in 1898 and used throughout the first half of the 20th century as the main concert and theatre hall.

During World War I, Buzău came under German occupation after mid-December 1916, and many inhabitants took refuge in the nearby villages or in Western Moldavia. The city resumed its development after the war. The interbellum brought about the first sport matches (association football and boxing) and the "Metalurgica" factory, a private business that was to be later confiscated by the communists, which continues to this day as part of a joined venture.

After World War II, the industrialization of Buzău was forcefully accelerated, and its population tripled in less than 50 years. New inhabitants were brought to work in newly-built factories mainly in the South of the city. Buzău has profoundly changed its appearance, working class quarters being built instead of the old commercial streets, some historical buildings, such as the Moldavia Theatre, were demolished. Their cultural role was taken over by the Labor Unions' Cultural Center and then by "Dacia" Cinema.

The city of Buzău is the county seat of Buzău County, Romania, in the historical region of Muntenia. It lies near the right bank of the Buzău River, between the south-eastern curvature of the Carpathian Mountains and the lowlands of Bărăgan Plain. The population is 115,494 (2011).

The largest Buzău-based company is Romet, a holding company made up of multiple firms that produse insulation materials for water and gas pipes, water filters, fire extinguishers and other related products. Milling is still present on the local market: the largest local producer is Boromir Prod.

The economy of Buzău is still more oriented towards industry rather than services. Most of the labor force in the city came from within the county, as Buzău is the center of a highly rural, compact and densely-populated area. The city was found to be in competition with larger cities for the labor force from other counties, a feature it shares with Alexandria. The proximity of Bucharest makes Buzău itself a source of internal migration, thus orbiting the capital city. 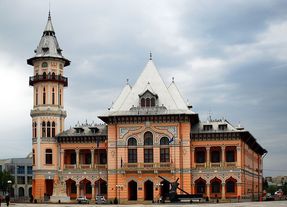 Eight historical monuments classified as having national importance exist in Buzău: the church of the Birth of Christ (1649, also known colloquially as the "Greeks' church" or the "Merchants' church") along with its belfry; the courthouse (20th century); the church of the Annunciation from the former Banu monastery (16th century); the church of the Dormition in Broșteni district, (1709, along with the belfry erected in 1914); the headquarters of the orthodox bishopric with the church of the Dormition (1649), the chapel (1841), the episcopal palace (secolul al XVII-lea), the old seminary (1838), the chancellery (19th century), gate belfry and the compound wall (18th century); the Vergu-Mănăilă mansion (18th century, which currently hosts the ethnography exhibit of the County Museum); Vasile Voiculescu County Library (1914); and the Communal Palace (city hall, 1899–1903).