The first inhabitants in the area arrived about 9,000 years ago. Physical evidence indicates agriculture from ca. 1000 AD, but there are no historical records. Up to the 13th century, the area was a borderland between the hunting grounds of Finnish Proper and Tavastian Finns, with a sparse population. Immigrants from Sweden established permanent agricultural settlements to the area from late 13th century onwards after the so-called Second Crusade to Finland. Espoo was a subdivision of the Kirkkonummi congregation until 1486-7. The oldest known document referring to Kirkkonummi is from 1330; Espoo as a subchapter has been dated to the 1380s, although the first document directly referring to Espoo is from as late as 1431.

The construction of the Espoo Cathedral, the oldest preserved building in Espoo, marks the independence of Espoo. Administratively, Espoo was a part of Uusimaa. When the province was split to Eastern and Western provinces governed from the Porvoo and Raasepori castles, respectively, the eastern border of the Raasepori province was in Espoo. The 13th century road connecting the most important cities in Finland at that time, the King`s Road, passes through Espoo on its way from Stockholm via Turku and Porvoo to Viipuri.

In 1557, King Gustaf Wasa decided to stabilize and develop the region by founding a royal mansion in Espoo. The government bought the villages of Espåby and Mankby, transferred the population elsewhere, and built the royal mansion in Espåby. The royal mansion housed the king's local plenipotentiary, and collected royal tax in kind paid by labor on the mansion's farm. The administrative center Espoon keskus has grown around the church and the Espoo railway station, but the municipality has retained a network-like structure to the modern day.

In 1920, Espoo was only a rural municipality of about 9,000 inhabitants. Agriculture was the primary source of income, with 75% of the population making their living from farming. Kaunianen was separated from Espoo in 1920, and it gained city rights the same year as Espoo, in 1972.

Espoo started to grow rapidly in the 1940s and '50s. It quickly developed from a rural municipality into a fully-fledged industrial city, gaining city rights in 1972. Due to its proximity to Helsinki, Espoo soon became popular amongst people working in the capital. In the fifty years from 1950 to 2000, the population of Espoo grew from 22,000 to 210,000.

Espoo is the second largest city and municipality in Finland. The population of the city is 270,416 as of 31 March 2016. It is part of the Finnish Capital Region, and most of its population lives in the inner urban core of the Helsinki metropolitan area, along with the cities of Helsinki, Vantaa and Kaunianen. The city is on the shore of the Gulf of Finland in the region of Uusimaa. The national park of Nuuksio is situated in northwestern Espoo.

Espoo encompasses 528 square kilometres, of which 312 km2 is land. Espoo doesn't have a traditional city center at all, but it has several local regional centers. Espoo is thus divided into seven major areas.

The city of Espoo is officially bilingual. The majority of the population, 83.6%, speaks Finnish as their mother tongue, while a minority of 8.3% speaks Swedish. 8% of Espoo's population has a first language other than Finnish or Swedish.

Aalto University is based in Otaniemi, Espoo, along with a thriving science community that includes numerous startups and organizations such as VTT - the Technical Research Center of Finland. Several major companies are based in Espoo, including Nokia, HMD Global, Tieto, KONE, Neste Oil, Fortum, Orion Corporation and Outokumpu, as well as video game developers Rovio and Remedy Entertainment. 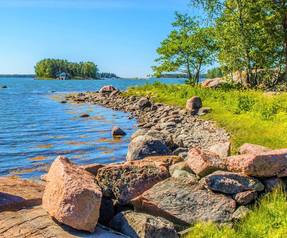 Espoo is a city rich in culture yet still firmly rooted in nature, nestled between Nuuksio National Park and the Baltic Sea. Home to Finland’s largest art museum, EMMA, as well as numerous other museums and galleries, Espoo’s cultural calendar is ever a busy one, as the city hosts international music and film festivals and boasts its own acclaimed Symphony Orchestra.

The famous King’s Road that leads from Stockholm to Viipuri, dating back to the 13th century, passes through Espoo. The oldest preserved building in the city is Espoo Cathedral, dating back to the 1480s. Today, Espoo is a thriving city, unique among the cities of Finland because instead of having a traditional city centre it has 5 separate local centres, the best known of which is Tapiola Garden City.