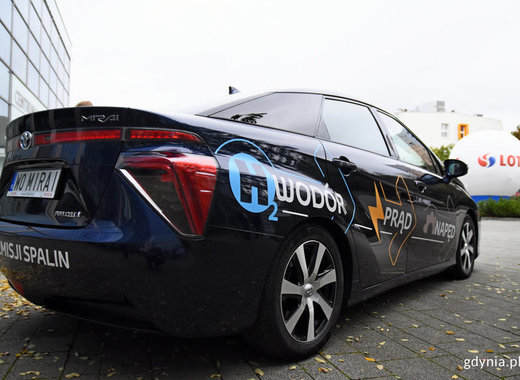 A hydrogen-powered passenger car ran for the first time on the streets of Gdynia. Toyota Mirai, created for the mass user, was presented to the attendees of the international conference PCHET 2 that took place last week in the Polish city. Hydrogen-technologies and modern developments were discussed by almost 300 participants at this year’s edition.

The international conference PCHET 2 in the Pomeranian Technology Park in Gdynia was organized for the second time by the Cluster of Hydrogen Technologies and Clean Coal Technologies gathering a wide economic, scientific and research community and local government administration.

“Our plan envisages clean air and high quality of life. Gdynia is already the leader of zero-emission transport and this did not happen by accident. We sensed trends very early and very quickly began to prepare for their implementation. Today, hydrogen seems to be a song of the future, but this revolution is happening right before our eyes” said Katarzyna Gruszecka-Spychała, Gdynia Vice President for Economy.

Yet another interesting event took place during the conference, namely the launch of the Pomeranian Hydrogen Valley program. The program was initiated by signing a declaration of cooperation by a wide range of stakeholders including the Municipality of Gdinya, Pomeranian Voivodeship, Association Metropolitan Area Gdańsk, Gdynia, Sopot and more.

“It is no accident that the "Pomeranian Hydrogen Valley" is established in Gdynia. As a local government, we attach great importance to matters related to climate protection, hence our support for joint activities in the field of development of environmentally friendly technologies and solutions based on hydrogen. The areas we consider for the use of hydrogen technologies are public transport and communal tasks” explained Ms Spychała.

The program will also affect a number of other areas, including research and development through the involvement of Polish universities with extensive use of the potential of the Gdańsk University of Technology.