Las Palmas de Gran Canaria eyes expansion, and the focus is on the suburbs 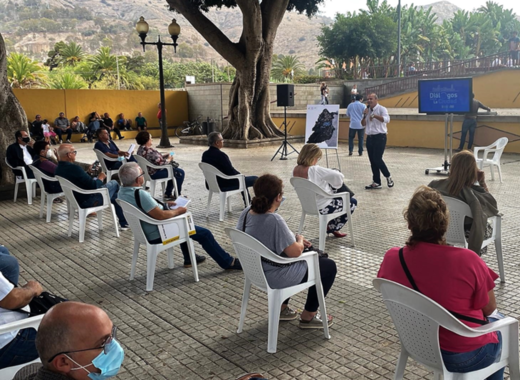 Yesterday evening in front of an audience seated in the Plaza de San Lorenzo, Mayor Augusto Hidalgo presented his plan for the future growth of the city. The event took place in the San Lorenzo neighbourhood, in the outskirts of Las Palmas, because the city executive would like to see it become the base for urban expansion.

The presentation was in the form of a town hall meeting

Armed with a presentation screen and a microphone, Mayor Hidalgo spoke in front of an assembly of his fellow townsmen about the projects which will revamp the District of Tamaraceite-San Lorenzo-Tenoya into a potential axis for the development of the Gran Canaria capital.

One of the points that were discussed was the planned construction of residential buildings in Tamaraceite Sur and Cruz del Ovejero. These will be completed as part of a pact signed between the City Hall and the Government of the Canary Islands.

Another initiative that was announced was the renovation of the historical San Lorenzo Farmers’ Market, which will see betterment, both in the visual aspect of its installations and the offering of its services.

The mayor also wanted to remind and assure the inhabitants that the Corredor Verde (“Green Corridor”), which runs alongside the Tamaraceite highway, will continue expanding as planned with its third phase. This undertaking of 5000 square metres, including green areas and sports installations, is already rejuvenating the area.

Following into the night, the meeting was also organized in a way to provide direct feedback between the city leader and his constituents. Different concerns and proposals were voiced by San Lorenzo residents, which mainly dealt with issues of mobility and connectivity between the neighbourhoods and into the central area of Las Palmas.