A new intelligent mobility system was presented this Tuesday in Murcia, Spain. Claire, which stands for “Clean Air Environment” is expected to reduce traffic-related pollution with a smart approach and is a first for Murcia. 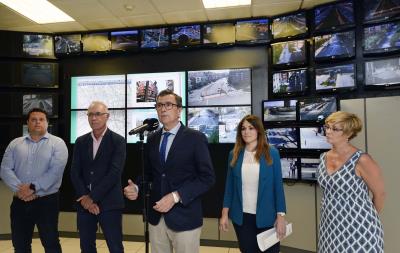 José Ballesta, Mayor of Murcia, explained that the data-driven decisions to be made could include changes in the regulation of traffic light cycles and intersections when there is a traffic jam, the establishment of alternative routes, priority to public transport, as well as notices and recommendations in real time in the information panels of the road network.

Two such sensors have already been installed in Primo de Rivera and Gran Vía. They will measure the values ​​of the polluting particles emitted by combustion vehicles, so that particle quantities such as carbon monoxide (CO), nitrogen oxide (NOx) or nitrogen dioxide (NO2) are known.

This action is part of the 'Clean Air' Strategy promoted by the Government of José Ballesta which also includes actions such as the gradual renewal of the bus fleet and the acquisition of new vehicles powered by biofuels, hybrids or electric vehicles, creation of deterrent parking lots, controls of the emissions of gases of vehicles in circulation, together with the Ecological Patrol of the Local Police, pedestrianization, new network of bike lanes, Electric Vehicle strategy, 2030 Forest Plan and sustainable lighting, among other measures.