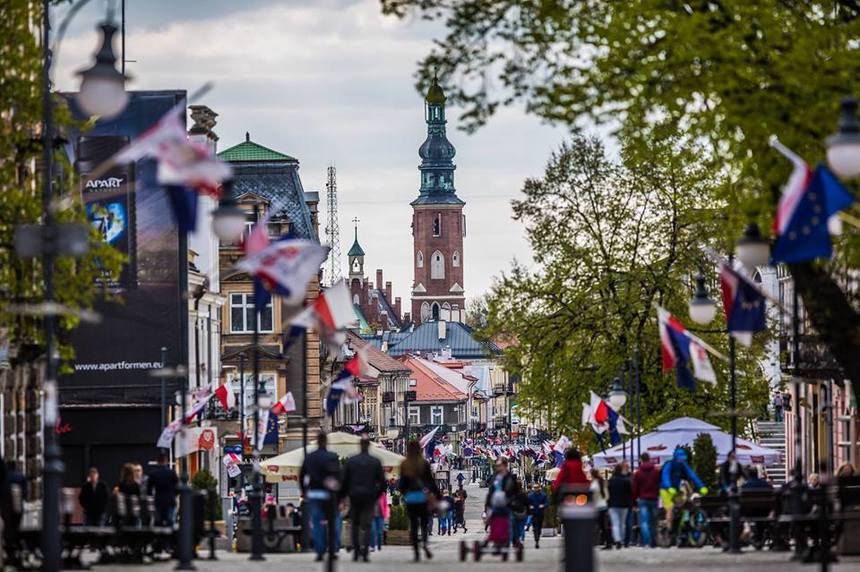 Radom appeared in history for the first time in the early Middle Ages, but the first note on Radom came from an edict of Pope Hadrian IV from the 12th century. It is generally assumed that the city took its name from Radomir, or the tribe of Radomirans. Here, in the valley of the Mleczna River, a castle surrounded by a double rampart and a moat was built in the second half of the 10th century.

New Radom was established in the 14th century when King Casimir the Great decided to strengthen the role of towns of Poland. The town received its civic rights in 1364, based on the frequently copied model of Magdeburg law. The city flourished during the reign of the Jagiellonian dynasty, and the city’s location at the crossroads of important routes enabled Radom to develop trade and services. The kings often visited Radom, and it served as the location for sessions of the Sejm and other state events.

During the Swedish Deluge in 17th century the city and the castle were burned down, leaving only 37 houses and 375 inhabitants. During the time of the partitions in the 19th century, Radom was held successively by Austria and Russia. As an important administrative centre the town gradually developed its industries of leather, metallurgy and food. A direct road to Warsaw was marked out and railroad lines to Deblin and Dabrowa Gornicza were built.

When Poland regained independence in 1918, following World War I, Radom was returned to Poland and the development of the town speeded up. The city became part of the Central Industrial District, the most modern in Poland, with the building of the State Arms Factory as well as other important investments. During World War II, Radom fell into German hands, and these years of war were the worst time for the region – with the extermination of Polish and Jewish inhabitants, deportations to concentration camps, and inhuman cruelty becoming an everyday reality.

The liberation of the city came in 1945, and the city started growing rapidly. The former suburbs were urbanised thanks to new housing developments, and the number of residents grew. Cultural life in Radom also flourished, especially the theatre, museums, and local libraries. In the years 1975-1998, Radom was the capital of voivodship but in 1999 it was included into the Masovian Voivodship.

Radom is the second largest city in the Masovian Voivodship, after Warsaw and is situated about 100 km south of the capital, on the Mleczna River. Radom has 220 000 inhabitants and it is a mid-sized city.

The economy of the city relies predominantly on textile milling, glassworks and chemical works, munitions and footwear manufacturing, and food processing. Radom has a museum, a theatre, and a school of engineering.

Radom is a place where history meets modernity. Historical tenement houses, churches, and other old buildings sit comfortably among newly built business and shopping centres, together creating an unusual climate for the city. The city has various leisure and sports events, with the modernised sports hall also hosting numerous feasting and dancing events.

Radom is a local cultural centre, boasting one of the most impressive collections of the works of Jacek Malczewski, a very famous Polish painter and best remembered citizen of Radom (1854-1929). One should not miss the opportunity to visit the open-air Village Museum (skansen), set in a scenic location on the southwestern edge of the city, and which has precious examples of folk architecture and artefacts from the 18th and 19th centuries.

In Radom’s Old Town you can find many reminders of the rich city’s history. Among the most interesting are the church of St. John the Baptist, founded by King Casimir the Great, and the Town Hall and the former burgher’s houses in the market square dating from the 16th and 17th centuries. The very beautiful Gosling House and Esther`s House, now housing a museum of contemporary art, are worth at least a little of anyone’s time. One of the most precious historical sights of Radom is Gothic Monastery of Bernardines. Some of the buildings in the city are designed by famous architects, including Enrico Marconi, Antonio Corazzi and Stefan Szyller.