Through European, national and local projects we have succeeded in changing the face of Simleu Silvaniei 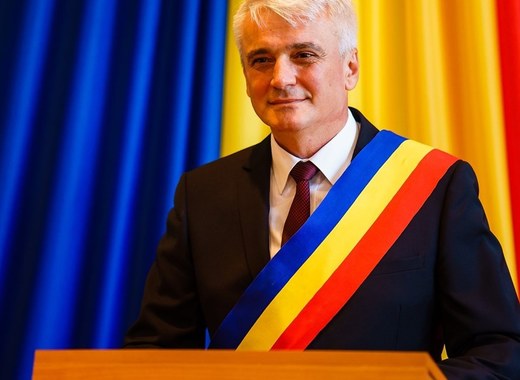 Septimiu Cătălin Țurcaș was born on 6th September 1968 in Crasna, Sălaj County, Romania. He graduated the Technical University of Cluj-Napoca in the engineer field. He is the mayor of Șimleu Silvaniei from June 2004 with an experience of 15 years in the administration domain.

Mayor Turcas, how would you describe Șimleu Silvaniei? What do you want our audience to know about it?

Șimleu Silvaniei is the town hidden by hills, which keeps alive our ancestors’ traces, where traditions and new trends blend perfectly, where you can get to know Transylvanian hospitality.

Șimleu Silvaniei, the town situated at the foot of Măgura hill, also named “Brașov of North” (Ion Simionescu), was first mentioned in documents in 1251. It was inhabited since ancient times by the free dacians, as proof stands the existence of the old fortress Dacidava, on Măgura, where the archaeologists found traces of life, as well as a rich Dacian materials, respectively two gepid thesaurus, consisting of gold pieces dated from the fifth century. Șimleu Silvaniei was always a strategic place, sat as in a nest, being surrounded by Măgura Hill, and having the old Báthory Fortress as a core of the city, built in the 15th century by the Báthory family.

You are mayor of Șimleu Silvaniei since 2004. How did the municipality change over this period?

We took over a city with an inadequate infrastructure: missing gas, the city drainage system at a level of 37%, poor road infrastructure. Through European, national and local projects we have succeeded in changing the face of the city, so today, gas, water, sewerage system and road infrastructure is a satisfactory one. I think these are the most important achievements in this period.

Through the strategic actions adopted and the investment projects, Şimleu Silvaniei can today be an attractive city. We are developing the city through a series of European projects: health, social and education. The biggest issue in this area is the lack of work resources, as more than 15% of the population is working in Western European countries. There are currently four investors with more than 400 employees at the local level. The large number of employees means a substantial contribution to the local budget contributing significantly to the development of the city.

Next year there are local elections in Romania. Will you be running for a fifth term?

As there are few projects I have not completed yet, I want to achieve them from the position of the mayor of the city. I think I will run for a fifth term next year.

The municipality has a very rich cultural calendar. How do you finance these events?

Most of the cultural events are funded from the town hall budget resources and supplementary funds from the County Council and sponsors.

Important projects are being developed in the town. We have twinning agreements with cities from Hungary, Israel, Republic of Moldavia and we are seeking for new perspectives in Poland. Common history with 4 nationalities has developed the Bathory Festival: reenactment festival based on the Royal History in Șimleu Silvaniei.

In the past years we opened new trails for other festival and cultural events such as: La Fântâna Dorului, International Math Contest - Topan, Humoristic Festival, Sport Festival.

A successful program it was started few years ago with young volunteers which are involved in all the socio-cultural events. Pupils from the high schools in the town are being selected for a future career as volunteers.

In the last 2 years we succeeded to get involved with Red Cross and to open a new Facility Center for this. Many NGO’s are being involved in different actions such as helping poor people with necessary materials, holding meetings for health issues, educational purposes etc.

TheMayor.eu is a unified platform for the European municipalities, where the citizens can get the latest information about what is taking place in the European Union. How can the portal be useful to you and to the citizens of Șimleu Silvaniei?

In the era of technology this could be an important tool that will facilitate people interested an easy access to the information.