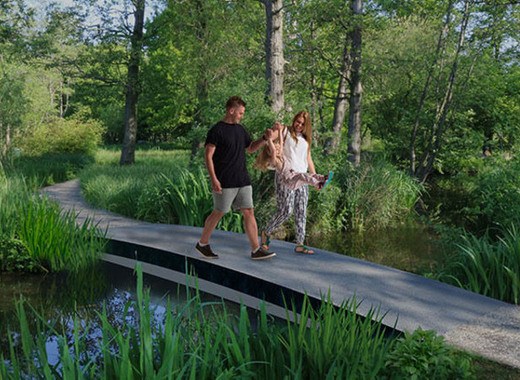 Rotterdam will soon have the first 3D printed, lightweight pedestrian bridge in the Netherlands announced the municipality on Friday. The device made of recycled materials will be installed in the Kralingse Bos, known as the green heart of the city. For this project, the municipality collaborates with Royal HaskoningDHV and DSM.

Royal HaskoningDHV presented the prototype of the bridge in 2019 and is now one step closer to bringing it to life in Rotterdam. The bridge is made from a fibre-reinforced  called Arnite® which combines high performance with circularity.

It is developed respecting the highest standards of safety for FRP bridge design, underline its creators and Rotterdam infrastructure experts in composite bridges will be closely involved in every step of the design and build process. The first 3D-printed fibre-reinforced plastic footbridge in the Netherlands is expected to be completed by the end of the year.

It will be made entirely from recycled materials and will be itself recyclable once it reaches its lifetime, which is a step towards developing sustainable bridges in the future. As for its tenacity, the 3D device is expected to last at least twice as long as the current wooden bridge.

Out with the old, in with the new bridges

The existing bridge is 6.5-meter-long and has been in the garden in the Kralingse Bos since 1975. Its replacement made by a 3D printing machine promises to be much lighter and more resistant. For example, it could be provided with applications sending data to a digital twin that will monitor its state of maintenance, the structural safety and lifespan in a smart and efficient manner.

Mozafar Said, Asset Manager from the City of Rotterdam, said that “The city of Rotterdam is proud to be a leader in the smart and circular use of composite bridges. Together with Royal HaskoningDHV and DSM, we are continuing to push the frontiers of sustainability for bridges, using thermoplastics which will enable greater circularity.”

He also added that the Dutch city currently has 1000 bridges and is therefore constantly looking for innovative solutions, allowing for the latest generation bridges to be more sustainable, circular, with lower maintenance and lifecycle costs.