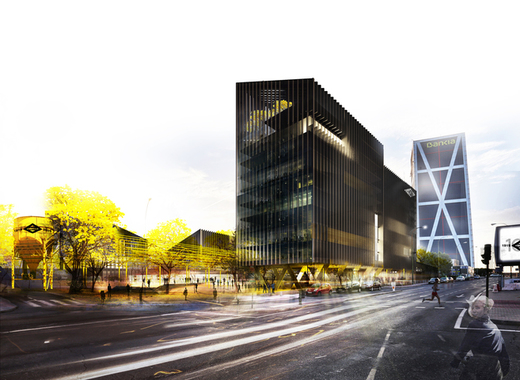 The acting president of the Community of Madrid, Pedro Rollán, inspected last Wednesday the progress of the construction works of the new headquarters of Metro de Madrid, located next to Plaza de Castilla. The Administrative Technological Centre as it is called, is scheduled to be completed by the end of 2020 with first employees arriving in 2021.

Then, a second phase of the project will be launched. The site will include a Comprehensive Transportation Centre that will allow the relocation and concentration of the main administrative and control services of Metro in the near future, explains Rollán. Thus, it will welcome practically all the company's office staff, exceeding 1,000 workers. The project has a budget of 26 million euros, 20 of which for the construction of the property and the remaining 6 for the introduction of facilities.

Rollán expects that the concentration of services will lead to greater synergy and a reduction in costs of Metro de Madrid, thanks to greater efficiency in the organization's performance. Mainly, savings in rent and a reduction of response times in the resolution of incidents are foreseen.

Furthermore, another property will go to the Regional Transport Consortium - a Transport Museum will be opened, as well as a parking lot with more than 300 places, a large garden and outdoor areas in the central spaces and a plant cover changing depending on the different times of the year. In terms of sustainability, the new headquarters is conceived as a Nearly Zero Energy Building (NZEB), in compliance with the European directives for public buildings built as of 2018.

Thus, it incorporates strategies of design and choice of materials aiming to reduce heat, especially in roofs by means of introducing shade and vegetation, accompanied by a reduction of energy consumption and limiting the ecological footprint through utilization of natural resources. In addition, it will have high efficiency facilities, such as geothermal energy. The parking will have electric vehicle recharge stations as well as places for bicycles.

Finally, it is expected that the new buildings will remind of the place's railway past. Thus, the improvement of the functioning of the service is complemented by the creation of a space maintaining the legacy of the old garages that can be enjoyed by citizens. "This place will remind of the metropolitan railway culture, highlighting the presence of Metro in a space that recalls its history, underlines its evolution and confirms its modernity," explained Rollán.

The transfer to this venue comes following the sale of the current headquarters of Metro de Madrid on Cavanilles Street to the El Andén del Retiro Residential Cooperative. The sale price was 28.8 million euros, of which 8.8 million will be paid in cash, while the remaining 20 million – in kind consisting of construction of the new headquarters. For the design of the project, Metro de Madrid opened an architecture contest won by the 'Jardín 1' team.