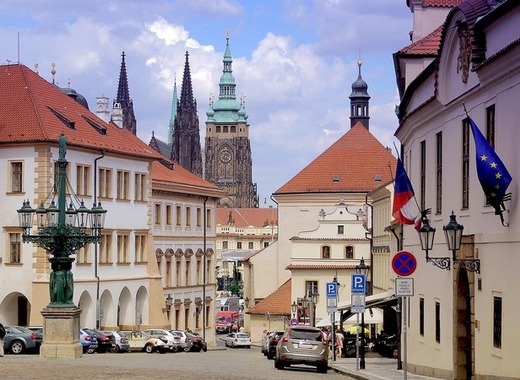 Prague is currently testing a pilot project aimed to make the areas surrounding schools safer, the municipality announced on Monday. From 7 to 25 September 2020, the transport regime in the vicinity of selected school facilities will be adjusted as part of the "School Street" project. By restricting car access, the city authorities want to grant a safer and more comfortable start of the day to children and staff.

The “School Street” project is a cooperation between the Prague Department of Transport, Prague 20 City District and two primary schools - Stoliňská and Chodovická. Its main goal is to improve school safety but also – to draw attention to alternative transport options.

For this purpose, for a period of three weeks, the traffic will be modified so that no motor vehicles will be allowed to enter the streets in front of the selected school establishments. The limitations apply only for 30 minutes before the start of the school day (7:30-8:00), hence they are not likely to cause big inconveniences to drivers.

On the contrary, the expected benefits are multiple: the spaces will remain quiet and safe for locals and for all kids who get to school on foot, by bike, by scooter or otherwise. Furthermore, during the “rush” school hours, children and staff entering the school premises will breath cleaner air. The ban will be controlled by traffic signs and physical barriers (traffic cones).

On the benefits of walking to school

An important aspect of the whole project is the plan recommending routes to the school. It maps everything that is important in the vicinity of the participating schools for commuters by public transport, by bike or on foot. These trips are meant to help parents and children learn how to get to school and back safely and - if possible - without having to use a car.

"We all want children's trips to schools to be safe. And with this pilot project, we are showing how we can protect the most vulnerable road users. The streets in front of primary schools are very busy just before the start of the day, so we want to help increase the safety of children, but also point out that you can get to school safely and comfortably in ways other than by car," said Deputy Mayor responsible for Transport, Adam Scheinherr, as quoted by the municipal website.

For his part, councillor Vít Šimral explained that the project can have more than one additional benefit. In his words, a child that regularly walks to kindergarten or school acquires competencies, which can be used throughout a lifetime, such as moving in traffic, noticing landmarks on the road to school or estimating distances and times. If the child shares the daily walk with friends, he or she also develops social skills.

Finally, the municipality points out that similar projects have been working successfully for years in Western countries, and since June 2020, also in Říčany (a town in Central Bohemia with 16 000 inhabitants). Furthermore, as part of the pandemic measures introduced this spring, a special transport regime was introduced for fifteen primary schools in The Hague, the Netherlands where a car-free area allows the observation of the recommended 1.5 m safety distance.

The Mayor of District 20 in Prague, Petr Měšťan, said that he has been trying to make the spaces in front of schools safer for years. He expressed his hopes that the project evaluation in October will be successful and that other schools will join the initiative.