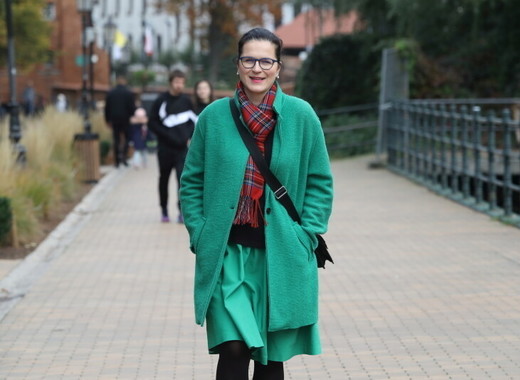 Ms Dulkiewicz, you have stepped into the office in a very difficult moment for the city. Yet, you received particularly high levels of support in the early elections this year. Half a year later, do you feel like you have earned the trust of the citizens in this new role?

In my opinion, real trust takes years to build. It involves proven skills and talent to use them, promises kept and a sense of following the right path. Half a year is not enough. Although, I confirm – I am motivated by the kindness and support I receive from the residents of Gdańsk who express them every day during individual meetings, via social media or by mail.

The Institute of Local Authority Research, in its Local Authority Confidence Rating, surveyed Poles on the level of confidence in 12 city mayors in Poland. It is still difficult for me to believe but most of the respondents trust… me – 32.69% (22.54% - definitely trust and 10.15% - rather trust). To me, the results are surprising.

I feel I am carrying a heavy burden of responsibility. Now it is a challenge not to let people down.

You say that most important in your governance will be to create a sense of community in a modern city with a soul. How do you foster solidarity in such a big and dynamic city as Gdansk?

The feeling of community involves numerous aspects: pride in the place where you live, good memories, feeling of belonging, mutual responsibility for the neighbourhood, good relations with neighbours, satisfaction with the city development… They all constitute the feeling that this is my place, and I am related to others through parallel fate.

The Solidarity Movement – established during a massive strike in the Lenin shipyard in Gdańsk in August 1980 – raised very high standarts. On a national scale, ten million people joined the Solidarity Trade Union. However, it is not about numbers. It is important to remember the relations that brought people together and their concern for the common good.

Today, it is more difficult to evoke the feeling of community since we are more self-sufficient. We need common issues and a common goal. In Gdańsk, we have been conducting various projects giving our residents reasons to be together.

Many undertakings are addressed to our neighbourhoods, e.g. Gdańsk Neighbours’ Day or Understanding August – people get together around an idea and act together, e.g. write a district chronicle or neighbour’s cook book, arrange a small garden at the backyard using their own resources, decorate an underground passage together…

Every year, we increase resources for the Civic Budget – the residents of Gdańsk develop their own projects, later we vote to choose the most interesting ones and the winning projects are put into action. We invest in cultural activities encouraging people to leave home and stimulating them to spend their free time together, such as the FETA summer street & open-air theatre festival, or the Narrations festival of installations and interventions in public space, organized in the autumn, and All About Freedom Festival, a film festival strongly encouraging  debate.

The annually established playgrounds and green squares as well as revitalized parks are extremely important – these are places which bring people together and develop appetite for more.

The tragic death that took Mayor Paweł Adamowicz away from us in January was an unimaginable tragedy, but in Gdańsk it also brought some good. The feeling of community among the residents unquestionably increased.

The family is a main priority of your electoral programme. Would you share some general and specific measures in this area that you will be implementing in the months to follow ?

The family but also single parents raising their children are very important for the municipal community. I care about managing the city in such a way that it can facilitate the family life and make it more interesting, e.g. through leisure time offers, but also encourage the residents of Gdańsk to start a family and have children. It is certainly not common knowledge but last year in Pomerania we had the highest birth-rate in the country (amounting to 0.37 percent). Within the last decade, our region sees constant population growth. On a different note, we have also recorded an increase in the number of domestic and foreign migrations.

Pursuant to the forecasts, the number of inhabitants in Pomorskie Province/Voivodeship is going to increase till 2025. Then, from 2030 the number may start to decline. The effects should be already minimized these days.

We have successfully implemented the Gdańsk Large Family Card for multi-child families, providing numerous discounts, e.g. in the municipal cultural centres. We have just introduced the Gdańsk Nursery Voucher for parents and carers who benefit from non-public care centres. We have been building more such facilities through a large program for extending the nursery offer in Gdańsk.

Thanks to the funding from the European Social Fund we have been building 16 new facilities for 1600 children. This translates into increasing the number of free places for the youngest by nearly 60 percent. Schoolchildren and students up to 24 years of age are entitled to use public transport in Gdańsk free of charge.

Moreover, the in vitro program in Gdańsk proved to be very successful. Gdańsk was the first city in Pomerania to introduce the residents’ procreation support program. Thanks to the program implemented in our city as many as 157 children were born!

Within the municipal operational program until 2023 we have been implementing projects aimed to improve the quality of the family support system and the foster care system, and to increase the family development potential.

The first autonomous bus in Poland is already running in the streets of Gdansk. What more can we expect in terms of transport and mobility innovations in the near future?

Next year, pursuant to the Act on electromobility and alternative fuels, we are obliged to adopt, under the City Council resolution, the strategy for electromobility development in Gdańsk. Work is underway and the social consultations are still ahead of us. In the mobility department we have been conducting several innovative projects, e.g. on the electric ferry and smart parking solutions. The project on building the electric vehicle charging stations is gaining momentum.

With 331 submissions and PLN 18.5 million funding, this year’s Civic Budget appears to be a great success. Would you say a few words about it? Are there any citizen-driven initiatives (ongoing or past) that you are personally fond of?

Year by year, the Civic Budget is becoming more and more popular among the city residents, both in terms of the number of submitted projects and the number of votes cast. I would like to point out that every resident of Gdańsk is entitled to cast a vote, even the children. We score 5 points for projects submitted in our district and we can also support one of the all-city projects.

I am very fond of every civic project. I need to mention, for example, an initiative consistently implemented by the activists from Dolne Miasto. Every year, they submit another part of the project for consideration to the Civic Budget and later convince the residents to support them. In this way, they have managed to renovate an old park suffering years of neglect.

Another valuable initiative involves installing an electronic display in front of every school in Gdańsk; the device would display smiling faces and sad faces, praising the drivers who drive slowly and asking those who drive fast to take their foot off the gas.

This year, I was very happy about a project in my district, in the Old Town – the revitalization of walking and leisure area along the historic Radunia river canal, built in the 14th century  by the Teutonic Order.

Finally, you have expressed your intention that the important issues in Gdansk will be decided together with the residents. How do you involve them in decision-making and how do you engage them with the development of the city?

I focus on dialogue. In September and October, together with my deputies and other officials we visited the districts in Gdańsk inviting our residents to take part in discussions. We organized meetings in the city squares, sitting at a round table. To commemorate the 30th anniversary of partially free elections and the preceding Round Table Talks, the European Solidarity Centre produced, in June this year, a large urban and mobile piece of furniture – a round table. This table became a place of numerous interactions, as well as debates. We had an opportunity not only to discuss very difficult issues, but also to analyse the vision for our city.

In Gdańsk, we have been implementing a broad program of social consultations, and anyone who has done it at least once knows how strenuous and exhaustive it can be. However, it is worth doing it over and over again since we have acquired a number of municipal activists and local non-governmental organizations. Over the past years, our awareness as citizens has increased meaningfully. Well, we are still doing our homework that Western countries had already done; unfortunately, we had Communism standing in our way.

Moreover, the district councils and neighbourhood homes strongly encourage the inhabitants to participate in the city life, and we have been investing in both of these entities. We have also established a Youth City Council and we benefit from numerous social organizations appointed to the Mayor of Gdańsk that advise us on particular issues, such as equal treatment, immigrant integration, issues related to the elderly and sport.

And when the winter is over - our round table will get back to work.