The project will increase the allure of the historic location as a place for events, sport and recreation 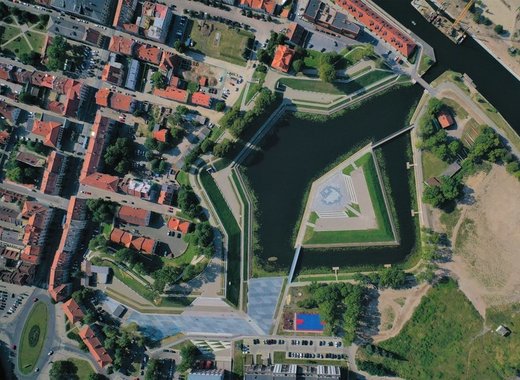 The Bastion complex in Klaipėda Old Town (Lithuania), better known as Jonas Hill, is a popular site of many Klaipėda community events, including Jūros šventė (Sea Festival), Saint John’s Eve and Užgavėnės (the time before Lent). Now the complex has undergone a spectacular facelift, with new spaces for events, recreational activities and active leisure near the point of completion.

Testimony of a tumultuous past

The name of the place derives from the St. John’s Evangelical Lutheran Church that stood there from 1706 until its destruction in the Second World War. An elaborate bastion defence system with water trenches protected Klaipėda through the occupations of the Swedish and Russian armies in the 17th and 18th century. Subsequently the fortifications lost their military significance and were pulled down, and nowadays only fragments of their former glory welcome tourists on Jonas Hill.

“When renovating the Bastion complex, we set ourselves the goal that this exclusive place, reminiscent of the history of Klaipeda, would be a popular space for events, leisure time of citizens and a tourist highlight. We hope that now everyone will find a favourite place here – seekers of quiet rest, sports lovers, and families with children,” Klaipėda Mayor Vytautas Grubliauskas told the city website.

Most of the changes have been done on the side of the Culture Factory - there is a new terraced playground, a fountain, a new open-air event venue with a grandstand for spectators, two children's playgrounds nearby, and an outdoor fitness area. All of the facilities offer a free Wi-Fi access. A new bridge connects this area with Jonas Hill Island, where most events have been held previously.

These changes are the most visible ones, but they are only a small part of the work that has been done, assures the Mayor. During the implementation of the project, the embankments of the Bastion complex were restored along with the waterfront embankments, new footpaths were installed, stairs were arranged, complete with rubbish bins, lighting and video surveillance.

Partly funded by the EU

A new section of the bicycle path along Jonas Hill has been built, providing a link to the lane along the Dane River. Also, two bridges in the area have been repaired, and 4 pontoon piers have been installed, where small boats and pedal boats will be able to moor. The total value of the renovation project is EUR 2.85 million, of which EUR 1.7 million has been generated from European Union funds.