The largest skate park in the Netherlands opens today 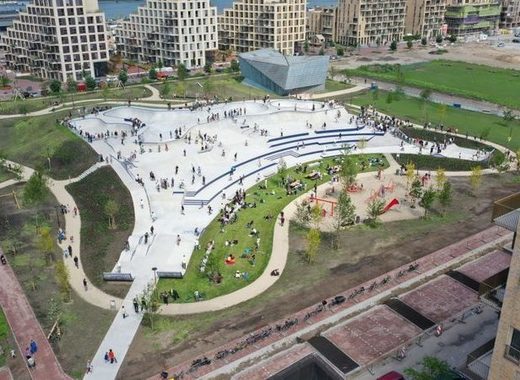 Šaltinis: Opening day of the largest skate park in the Netherlands / SkateOn

The largest concrete-covered skate park in the Netherlands opens on Friday 19 June. Located on Zeeburger Island, it has an area of ​​3885 m2 with spaces for beginners, advanced skaters, BMX riders and pedestrians. Due to the coronavirus circumstances, however, the municipal authorities do not preview any official inauguration with a public.

Sport – an essential part of the urban landscape

The construction of the new skate park in Amsterdam is driven by the view that new neighbourhoods should consist of something more than just homes. There, the authorities believe, must also be plenty of greenery and space for sports and exercise.

The Sportheldenbuurt, the first residential area on Zeeburger Island, (5 km west of Amsterdam City Center is believed to offer precisely that to its residents. What is more, the urban sports zone, where the skate park is located, is part of a park that has been devised together with local residents. The brand-new skate park is located in the Urban Sportzone.

From an idea to a record-breaking sports facility

The idea for a skate park at this location came from Stan Postmus of Skatemates. In 2015, the proposal received the green light from the City Council of Amsterdam.

According to Skatemates, the Dutch capital has over 57 thousand people who would regularly use an urban sports zone. What is more, they continue, Amsterdam used to lack the appropriate infrastructure for professional skateboarders and BMX riders.

According to the concept, the park was supposed to serve as a training facility for the future Olympic athletes (in normal circumstances, Skateboarding was supposed to have its debut at the Tokyo 2020 games) and to be big enough to welcome national and international skate competitions.*

The Danish agency Glifberg - Lykke then set to work on the design of the track. Arno Coenen and Iris Roskam, known for the panels in the Markthal in Rotterdam, designed a special tile panel for the layout of the track.

The design of the park is conceived so as to offer something for non-riders as well. The area around the sports zone is designed in the English landscape style with natural winding paths and hills in ever-changing green environments with trees, as well as a jogging track and sports and play equipment for all ages. The park was built by the Dutch-based SkateOn.

It is previewed that in the future, public sports fields will be built next to the park. The entire Urban Sports Zone will be completed in mid-2021.

*By the time of the completion of the park in Amsterdam, a different facility was built in The Hague for the Dutch skateboard Olympic team.