Learn the story of the first democratically elected council 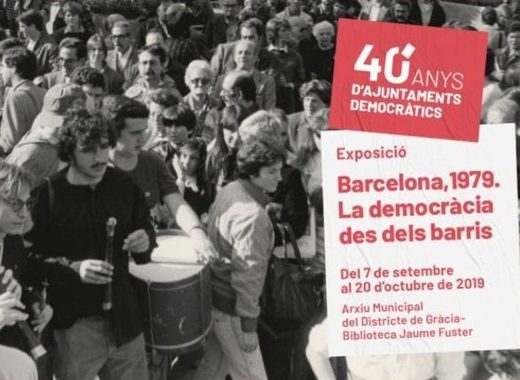 In September, Barcelona will be celebrating the first 40 years of democratic city council governance. Several exhibitions will be organized on the occasion under the frame "Barcelona, ​​1979. Democracy from the neighbourhoods”.

If you want to discover the great social, cultural and political impact that the first years of democracy had on the Catalan capital and its society, how the first democratic municipal government was formed, how the urban challenges of the time were faced or how popular cultural movements were developed, we recommend that you pay a visit to the event.

The Municipal Archives of the Districts of Nou Barris and Gràcia were be the first to open doors on September 5 and 6 with exhibitions that show what Barcelona was like before and after the first democratic municipal elections following the Franco regime on April 3, 1979, and the evolution of the organization of the town hall. In Nou Barris you will discover the arrival of the subway and the construction of basic equipment for citizens. In the case of Gràcia, the remarkable recovery of the cultural dynamics prior to the Franco dictatorship will be revealed, as well as the urban planning projects aiming to draw a neighbourhood close to its inhabitants.

To further understand the context that made Barcelona a democratic and modern city, the exhibitions are complemented by a round table linked to the theme of each district:  the social movements in Nou Barris with "Nou Barris: the dignity of the fight from the north of the city "(September 19th at 6:30 p.m.), and  culture and associationism in Gràcia with" Gràcia: culture, parties and associationism "(October 3 at 6:30 p.m.)

More information on the webpage of the City Council of Barcelona.