Skiing on a green slope in Copenhagen soon to become reality 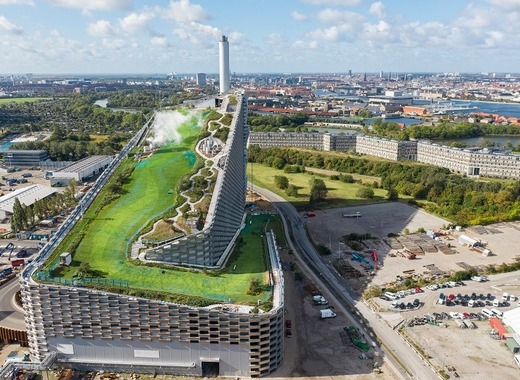 A brand-new green artificial ski slope will become reality soon in the Danish capital. What is intriguing is that it is located on the roof of the Amager Bakke waste-to-energy plant.  The new sport facility is coloured in vibrant shades of green.

The ski slope forms part of the Copenhill mountain activity centre, designed by BIG in collaboration with SLA Architects.  Up to now only around half of the slope has been installed and tested. The opening is planned for April 2020.

When the construction is complete, the 400-metre long slope will run from the top of the 90-metre-high building to its base, with a 180-degree turn halfway down the piste.

Why it's green, and not white?

The 10,000 sq. m surface is coloured in five shades of green. According to the architects, had the surface been painted white as real snow, it would quickly become dirty and hard to keep clean. The color chosen for the surface underlines the green and sustainable identity of the rooftop park and the waste incinerator in general.

Alongside the ski slope, a large park has been also created. In April 2020 the building will have hiking trails and viewpoints, and an 85-metre-high climbing wall will be installed on the outside of the structure.

The rest of the building's facilities, including the lifts, ski-rental shop and cafe are already completed. The artificial slope will open when it will be entirely installed and tested.

The waste-to-energy plant has been in operation since 2017. Its aim was to replace the 40-year-old Amagerforbraending facility and generate power by incinerating waste. The plant has a chimney that is designed to release a smoke ring every time 250 kilograms of carbon dioxide has been released into the atmosphere, in order to remind local residents of their carbon footprint.