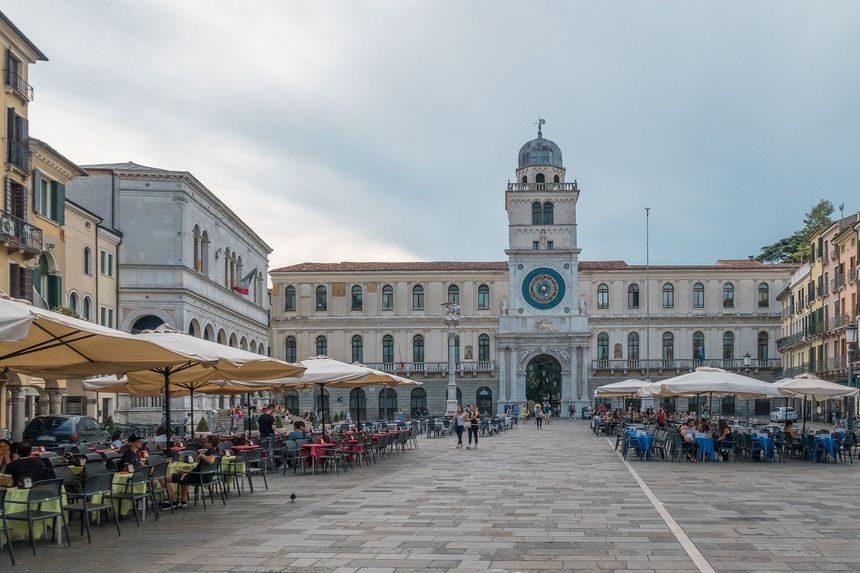 According to the legend, Padua was founded in 1185 B.C. by the mythical warrior Antenor, who, having escaped from the fall of Troy, led the allied people of Eneti or Veneti from Paphlagonia (northern Turkey) along Dalmatia to the mouth of the River Brenta. They settled down in the area already inhabited by the Euganei (the surrounding volcanic hills took the name of “Euganean Hills” from them). The Veneti founded the village of Padus (a greek word meaning ‘marsh’) in a land rich in canals and small branches of the two bigger rivers, Brenta and Bacchiglione, which still cross the town. Thanks to this position on the middle of a confluence of communication ways it became soon a big commercial and manufacturing centre, renowned for horse breeding and production of wool.

The University of Padua was founded in 1222. It was a free and “democratic” University, the only in Europe to be ruled by students and to accept Jewish students as well as the first she-student in the world. In fact its motto was and remains “Universa Universis Patavina Libertas”.

In 1545 was founded the Botanical Garden of Padova, the oldest existing university botanical garden in the world. The Senate of the Venetian Republic approved its foundation for the cultivation of medicinal plants. Thanks to its great contribution to the development of many modern scientific disciplines, notably botany, medicine, chemistry, ecology, and pharmacy, it was inscribed in the UNESCO World Heritage List in 1997.

In 1797 Napoleon and its troops occupied Padua but after the Treaty of Campoformio the city was ceded to Austria. Then followed a very unstable period with continuous changes of power between the two invaders until 1815 when it became part of the newly formed Kingdom of Lombard-Veneto, part of the Austrian Empire.

Rising against the Habsburgic invaders, many students, intellectuals and professors of the University of Padua, who used to meet at Caffé Pedrocchi, on 8th February 1848 started a revolt which lasted only a few months but spurred Italian patriots and monarchy to start working to create the Kingdom of Italy and oppose the Austrian Empire. Thus, in 1866 Vittorio Emanuele II entered Padua and annexed it. From the Military Headquarters in town, General La Marmora sent Garibaldi the famous message to leave Tirol, to which Garibaldi replied with the famous one word telegram: “I obey!”

Padua had a very important role to play in World War I, both at the beginning, because the Supreme Command was moved here and at the end, because the armistice between Austria, Germany and Italy was signed on 3 November 1918 at Villa Giusti, on the outskirts of the town.

In the years immediately following the War, the city of Padua developed outside its historical boundaries and its population grew. New buildings were built in the typical fascist architectural style at the place of some Medieval poor houses.

Following Italy’s defeat in the Second World War, Padua became part of the Social Republic. It was bombed several times by Allied aircrafts and one of them destroyed one of the treasures of the Renaissance, the Ovetari Chapel frescoes by Mantegna, in the Eremitani Church.

The Scrovegni Chapel was saved by Paduans who completely covered it with sacks filled up with sand.

After the War, the city followed the rapid development of the Veneto Region, overturning its fame of poorest Region in northern Italy into the richest and most active area characterized by its small family businesses, who became the backbone of the local economy.

The Organisation for Economic Co-operation and Development (OECD) has underlined that this metropolitan region is one of the largest Italian economies and one of the most successful areas in the world for tourism, and it boosts a traditional export-oriented manufacturing vocation. The strength of the Padua-Treviso-Venice region is a high concentration of SMEs and a successful network of industrial clusters.

Padua is an important commercial and communications crossroad for the whole Region. But, besides being a remarkable economic centre in Northern Italy, it is also a renowned cultural centre rich in valued history sights (its University is the second oldest University in Italy: here taught Galileo Galilei and got her degree the first graduated woman in the world, Elena Lucrezia Cornaro Piscopia, in 1678).

Padua is an entrepreneurial city: 88.615 enterprises located in town and 19.332 in the nearby province, resulting in a vital entrepreneurial ecosystem of 107.947 enterprises, typically SMEs but also large companies, generating a turnover of 38,7 billion euros. Padua is the first province of Veneto region in terms of number of operating companies, ranking 9th in Italy (10th, excluding agricultural activities, with a total of industrial and tertiary companies reaching 76,223 units).

The labour market shows 387.000 employed people, ranking 2nd for the Veneto region and 11th in Italy. The employment rate - as the ratio between employed and population in age work (over 15 years) - is equal to 63.3%, a value significantly higher with respect to the national average (57.2%).

The industrial area of Padua was created in the eastern part of the city in 1946; it is now one of the biggest industrial zones in Europe, having an area of 11 million sqm. The main offices of 1,300 industries are based here, employing 50,000 people. In the industrial zone, there are two railway stations, one fluvial port, three truck terminals, two highway exits and a lot of connected services, such as hotels, post offices and directional centres. 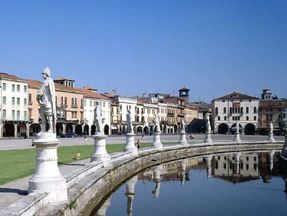 Tourism flow in Padua and its province (the largest EU SPA Resort with 160 hotels; 5,5 million overnight stays in 2017, in particular outbound tourism; 32.000 accommodations in hotels) placed the province of Padua as the 3rd tourist destination in Veneto after Venice and Verona.

Foreign tourism is mainly accounted for by tourists from German-speaking countries (especially for spas and wellness tourism in the thermal area around Padua), although in recent years there has been a gradual diversification of the nations of origin of visitors, in particular a relevant increase of tourist arrivals from Russia, China and Asia. 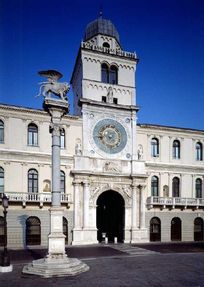 Padua has several important monuments which attract visitors, such as the Scrovegni Chapel frescoed by Giotto and the Civic Museums which register about 308.000 visitors a year, the Palace of Reason with 131.000 visitors and 6 other locations which are part of the “Urbs Picta” cycle of frescoes of the 14th century awaiting inclusion in the Unesco World Heritage List.

In Padua there are also two important sanctuarie: the Basilica of St Anthony that welcomes about 6 million pilgrims a year, and the Church of St Leopold Mandić.

Prato della Valle, one of the largest monumental squares in Europe, a 90,000 sqm elliptical square surrounded by 78 statues placed along two rings, is a wonderful place where millions of people can take a rest on its lawns.

Padua has also about 639 ancient Villas (also Palladian) and 141 of them can be visited.

Another attractive place to be visited is the ancient University (Bo Palace) which contains Galileo’s rostrum (the wooden podium set up by his students so that Galileo could teach in the “great hall of jurists” because of the great number of students attending his lessons), and the earliest permanent Anatomy Theatre in the world (1594-95).

The historical Caffé Pedrocchi is certainly linked to the history of the University because its professors and students who met in the coffee-rooms participated actively in the struggle for Italian independence, most noticeably in the local uprising of 8th February 1848. Then the White room of the Caffé was theatre of the launch of the local uprising against the Austrian invaders.