Amsterdam cools down its bridges on hot summer days

Beside humans and animals, city infrastructure can suffer, too 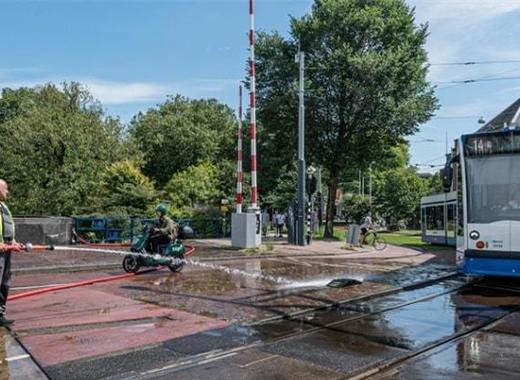 It is burning hot in Amsterdam and yet, in some places, there is enough water to get your feet wet before work. More precisely, at places with moveable bridges. If you were wondering why people have been spraying water in the Dutch capital for the past few days, here is the answer: to cool down the bridges.

Heatwaves can have a negative effect on urban installations

Since last year when unprecedented heatwaves hit Europe, many smart cities have come up with interesting solutions to protect people from extremely high temperatures. Examples range from Brussels designing a special heatwave plan, Antwerp launching information campaigns to inform citizens about how to protect themselves, or Bucharest setting up first aid kits around the city.

We have also seen solutions addressing urban space, such as furnishing public transport stops with greenery, equipping public spaces with fountains and vaporisers. But just as humans and animals are bothered by the extreme temperatures, so can be infrastructure.

One essential part of it – bridges – is the focus of the latest actions of municipal workers in the city of Amsterdam. For several days now, the capital has been deliberately spraying some bridges in order to cool them down.

More precisely, this is done on two routes. On the East Route - the targets are Berlagebrug and Hortusbrug. On the West Route, the measure concerns Zeilstraatbrug, Overtoomse Sluis, Kinkerbrug and Wiegbrug.

Most movable bridges in Amsterdam, the municipal website informs, have about 8 to 10 millimetres of clearance. But during a few days a year with peak temperatures, there is a chance that the older movable bridges expand more than 10, up to 14 millimetres which represents a great danger for their proper functioning.

In particular, above 25 degrees, there is the risk that the bridges expand so much that they can no longer open. That is why the authorities start monitoring when the thermometer hits 22-23 degrees and start acting when the threshold is reached. At very high temperatures (around 32-33 degrees), they may even continue to cool preventively in the evenings, to keep the heat out of the bridge as long as possible and to prevent further expansion.

It is essential to keep Amsterdam bridges operational for commercial shipping, but also to ensure that the waterways remain open for leisure boating.