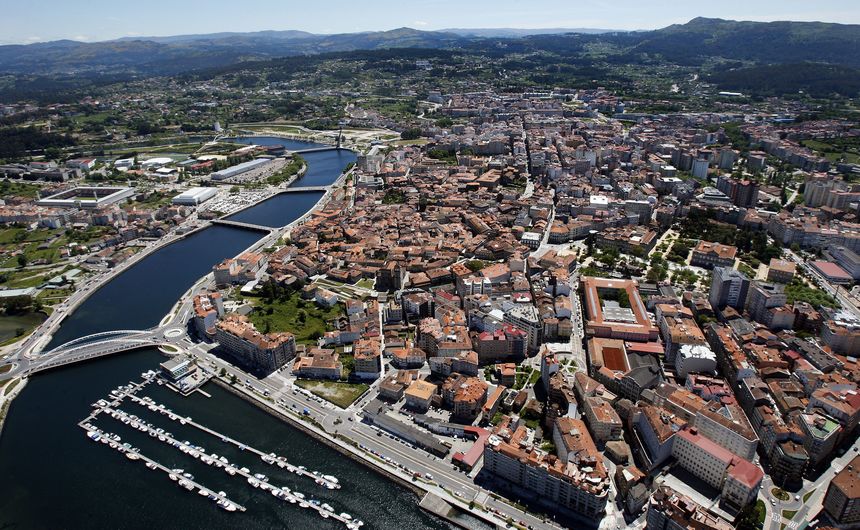 The origin of the city is related to its strategic location, which saw it as a stop both on the first Roman roads and later on the medieval route of the Portuguese Way to Compostela. The bridges are the most significant elements in the history of the city, both that of the Burgo, in the capital, and that of Ponte Sampaio, in the south.

Since 1999, Pontevedra has grown in population on average of about 1000 people per year which makes it the fastest growing Galician city. Typically, the city offers the lowest urban unemployment rate in Galicia, the youngest urban population in Galicia, the least outbound emigration from the country, and the highest urban birth rate.

Most of the municipal population lives in the urban area, although an important part is distributed among the 15 parishes that surround it, two of them (Ponte Sampaio and Canicouva) facing the Vigo estuary in the south. In the north, there are the parishes of Campañado, Alba, Cerponzóns, Verducido, Santa María and Santo André de Xeve, as well as Lérez, practically forming part of the urban area.

Most of the citizens of Pontevedra work in the services sector, something evident if one takes into account that the city is heading an area of influence of about 190 000 inhabitants, which implies the existence of an important and diversified commercial sector. On the other hand, it should be noted the privileged location in the centre of the Rías Bajas region makes it a tourist city and gives hospitality an important specific weight in the economy. The city is ranked among the Spanish cities with the highest annual income.

As a provincial capital, Pontevedra has numerous offices, delegations and facilities of the various public administrations, which employ a large number of civil servants.

The historic centre of Pontevedra, declared a National Historic-Artistic Site in 1951, is one of the best-preserved in Galicia, and an indisputable witness to the medieval splendour of the city when Pontevedra was still deeply linked to the sea.

The beauty of its streets and squares seduce all who visit them. Ancestral houses reveal the city’s past with their various architectural styles that preserve the charm of bygone times. Taking a stroll will help visitors discover the noble past of Pontevedra when walking past the numerous coats of arms that occupy the facades of the entire historic centre.

The Plaza de A Leña, where firewood was once sold to heat the kitchens, contains the three pazos (manor houses) that currently form a part of the Provincial Museum, recognized as one of the most representative museums of Galician history, archaeology and art. Just a step away, the Plaza de A Verdura - where until a few years ago you could buy fresh farm products - is one of the nerve centres of the town, a meeting point to have a snack before continuing the walk to O Teucro square, named after the Greek archer who is attributed with the foundation of Pontevedra.

Going down to the river bank we arrive at the Plaza de Mugartegui - just before reaching the food market - where the Mugartegui pazo is located, which currently serves as the headquarters of the Regulatory Council of the Rías Baixas Designation of Origin, the flag of the well-known Albariño wine from the area. Following the route, in the highest part of the historic centre, we find the spectacular A Ferraría square, where formerly the artisan smiths worked the forge. Today it is a meeting place for many of the shows organized in the city and houses, among other buildings, the Convent of San Francisco, with its beautiful gardens.

In addition to the excellent state of conservation of its civil architecture, the historic centre of Pontevedra stands out for its no less important religious architecture. Thus, the ruins of the old Santo Domingo Convent, despite the fact that today only part of its external skeleton and the head of the old temple are preserved, are considered to be the best exponent of the Galician Gothic.

Near the ruins of Santo Domingo is the Basilica of Santa María la Mayor, declared a National Monument, worth highlighting for its Plateresque façade ordered by the old Seafarers Guild in the 15th century, where one can see the Christ of the Good Voyage, to whom sailors entrusted before leaving on a journey.

It is also worth noting the several convent churches, such as that of San Francisco, that of La Peregrina, whose floor-plan is shaped like a scallop shell as a symbol of the Jacobean pilgrim route - and, a little further down, below the Plaza de A Leña, those of San Bartolomé and Santa Clara.

The historic centre is crossed by the Portuguese Way to Compostela, which enters from the Plaza de A Peregrina through the old Puerta de Trabancas, passes through the Soportales de A Ferraría, the Plaza de Curros Enríquez and the Rúa Real, to end in the area of the old docks on O Burgo bridge. Here, in the confluence area with the Lérez river, you can see the archaeological finds (whose origin date back to Roman times) that were found during the renovation of the Valentín García Escudero square.