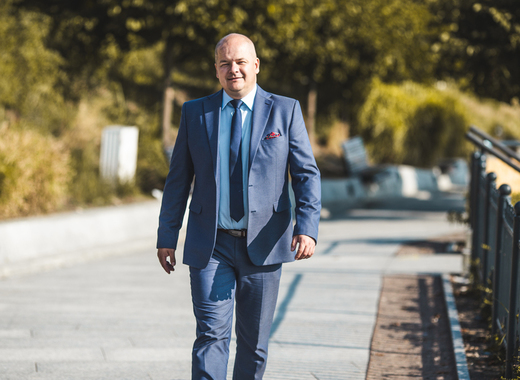 Andrzej Nowakowski, mayor of Plock since 2010, speaks about the developments of the city. He explains how the Polish city attracts investments, develops electromobility, intelligent transport and more.

Mr Nowakowski, would you describe the city of Plock? How did it change over the past decade, most of which you spent as its mayor?

We have been dynamically changing Płock for a decade. Our city has become more and more friendly and comfortable place to live in. We are building a city that cares for its inhabitants and encourages tourists to visit us.

We improve the quality of life because investment in people is also an investment in the city. We have modernized the educational base. We have built many kindergartens that offer a room for all preschool children today.

We run four municipal nurseries and currently are building an additional one. We have renovated schools, built new gyms and workshop halls to teach the forthcoming professionals. We have built many playgrounds, school sports facilities and park gyms.

Some of these recent investments were, in fact, the ideas submitted by Płock residents within the frames of the city's participatory budget. We built a ring-road and thanks to it we relocated the transit traffic outside the city centre.

It is much more comfortable and safer to drive around Płock today. Driving safety and convenience have also increased due to the fact that we renovated almost all major streets, modernized and cleared many intersections. We built a railway viaduct on the main thoroughfare of the city, thus eliminated the collision with trains passing through the city.

We have developed a network of bicycle routes, encouraging the inhabitants of Płock to use the bicycles massively as an alternative and ecological means of transport. The City Bike System enjoys great popularity among the residents. And now we are starting the reconstruction of the football stadium.

The magnificent building of the city hall

The question of what economic profile should Płock have has been discussed lately. In your opinion, what kind of economic specialization fits best the existing infrastructure and human potential of the city? What specific actions are you implementing to improve its economic prospects?

We are eager to accept practically any investor, Płock's economic profile is very flexible. Today we are the seat of the largest fuel and petrochemical company in Central and Eastern Europe, as well as the largest plastics producer in Poland.

The presence of giants from the fuel and chemical industries undoubtedly strongly influences the city's development. So, it is natural that many other, though small entrepreneurs who invest here, represent the chemical industry.

However, we are actually a city where companies from various industries operate. Agricultural machinery and up-to-date combine harvesters are being built in Płock at the CNH Industrial Polska factory. This factory has just expanded, taking advantage of our offer to buy municipal land for this expansion.

The shipbuilding industry is developed in Płock. A shipyard operates on the Vistula river, producing barges exported to the Western European countries. We also have a clothing and food industry. A large Levi Strauss factory and Dr. Oetker plant operate in Płock.

I repeat: we are open to any investor and we willingly cooperate with everyone. Due to this openness, the production of building materials has recently developed in Płock. Its scale is proved by the fact that Budmat company has recently been looking for sales representatives to work in the United States.

Last year you were rewarded for the effective acquisition and implementation of projects co-financed by the European Union. Could you tell us more about the help you received from the EU: what would not have been possible if it were not for the additional European funding?

We have implemented many projects thanks to EU funds. Probably the most important of them was the construction of the aforementioned ring-road. But one should also mention the modernization of the municipal sewerage system or the revitalization of the oldest Polish school, the 12th century Małachowianka, and beautiful Vistula embankments.

We arranged green areas and bought buses powered by low emission engines. Thanks to EU support, we have also implemented many soft projects such as raising the qualifications and acquiring new competencies by teachers and students.

You are willing to draft a Strategy for the development of electromobility in Płock. What are the main directions to follow in your opinion and have you already collected citizens’ opinions on this matter?

Electromobility is a completely new topic for Polish cities and their inhabitants’ mentality.  And in fact, we try to look in perspective at what awaits us when it comes to the development of the city, its communication system and environmental protection.

That is why we decided to start working on the Electromobility Development Strategy for Płock. For this purpose, we obtained co-financing from the National Fund for Environmental Protection and Water Management as part of the "GEPARD II Priority Program - Low-Emission Transport - Electromobility Development Strategy". Our application turned out to be one of the best in Poland, we took 9th place among over 200 submitted projects.

When developing the strategy, we were supported by the National Energy Conservation Agency. Together we organized a meeting with residents about electromobility. However, the first meeting attracted more local media attention than residents' participation.

But separately we launched an online survey about the mobility of Płock residents, asking what means of transport they use and what is their attitude towards vehicles with an electric engine. In this case, the response was very large.

We are still working on the creation of a good document about Płock mobility and electromobility. I would like it to be available in the first half of 2020.

In the near future, we will conduct consultations on the location of vehicle charging stations. The final result of all those activities will be a draft resolution regarding electromobility submitted to the City Council of Płock.

Despite the difficult financial situation that most local governments in Poland will be facing this year, Płock boasts a record-breaking budget for 2020. What economies are expected, which sectors will remain unchanged, where will you increase spending and investment?

For years we have been investing heavily in education and we will still do so and we will be expanding the educational base in many respects. We want to provide children and young people with the best conditions for learning, but also for sports and recreation.

One of the major investments in 2020 will go for the creation of an Intelligent Transport System. Could you tell us more about that and what improvements for citizens do you expect?

Intelligent traffic control system is one of several elements of the comprehensive modernization program of Płock's communication system. It consists of, among others, the reconstruction of streets and construction of parking lots, as well as the aforementioned modernization of the bus fleet.

Finally, we want to install devices on the intersections of the main communication axis in the centre of Płock that will automatically control the traffic flow by its mutual work. For example, the ITS will detect a growing number of vehicles heading to the city centre and will decide whether to give them a priority and turn the green lights on the intersections.

At the same time, it will stop traffic on cross streets where the system will notice the fewer number of vehicles. After launching ITS, we will drive around Płock a bit slower, but much more smoothly, so the travel time between particular parts of Płock will be shorter.

Is there any project or an innovative practice from Płock that you believe is worth sharing as an example with the other mayors in the European Union?

We have good experience in implementing projects in the public-private partnership formula. We are a leader in our country in this respect.

We have already implemented a thermo-modernization of 24 public buildings, mainly schools and kindergartens. Currently, we are selecting the contractor for another energy modernization project that will comprise 34 facilities, including schools, kindergartens and libraries.

Implementation of projects in the public-private partnership formula is not very popular and raises great concerns due to the complicated procedures. Therefore, we are happy to share our experiences with other local governments, especially during the International Public-Private Partnership Forum.

This year, the fourth edition of this event will take place in September and will include foreign participants. I invite everyone who would like to share their experiences and take advantage of good practices developed in Płock.

Discover Plock or subscribe to our newsletter to receive the latest from the EU cities right into your inbox.