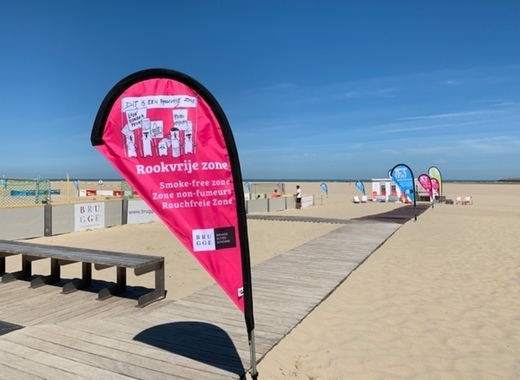 Bruges announced stricter measures for keeping its beaches clean, among which – setting up a non-smoking area in Zeebrugge. Smoking will be prohibited in the entire zone around the public bathing places, the sports beach and the beach library during the summer season. Clear labelling in several languages will signal the limits of the non-smoking area and those who nevertheless light a cigarette will be requested to leave the beach. The action is supplemented by regular monitoring of community guards.

Furthermore, smokers who stay outside the smoke-free zone will be addressed. They will also receive a beach ashtray or cigarette bag from the community guards where they can collect their cigarette butts, and then deposit them in the garbage can. Also, 1,500 cigarette bags will be distributed by the local eco-teams at the major beach events 'WeCanDance' and 'Bomboclat'.

Mayor Dirk De fauw described the introduction of the smoke-free beach zone as the most important measure to protect the cleanliness of the beach and the healthy air. The aim of these actions is to make smokers aware that it is no longer socially acceptable to light a cigarette anywhere in public spaces, let alone throw your butt on the ground or in the sand. According to research, the cigarette butt is responsible for 49% of the litter and is the biggest polluter of oceans.

Previously, at the end of 2018, new urban trash cans were also placed on the seawall, all of which have an ashtray. In addition, extra waste islands are provided at the beach, so that every beachgoer has a garbage can within reach.

On 19 June 2019, the City of Bruges signed the 'Healthy Municipality' charter. With this, Bruges is resolutely opting for the development of a coherent preventive health policy. It encourages every citizen, the most vulnerable in particular, to live healthily in a healthy environment.