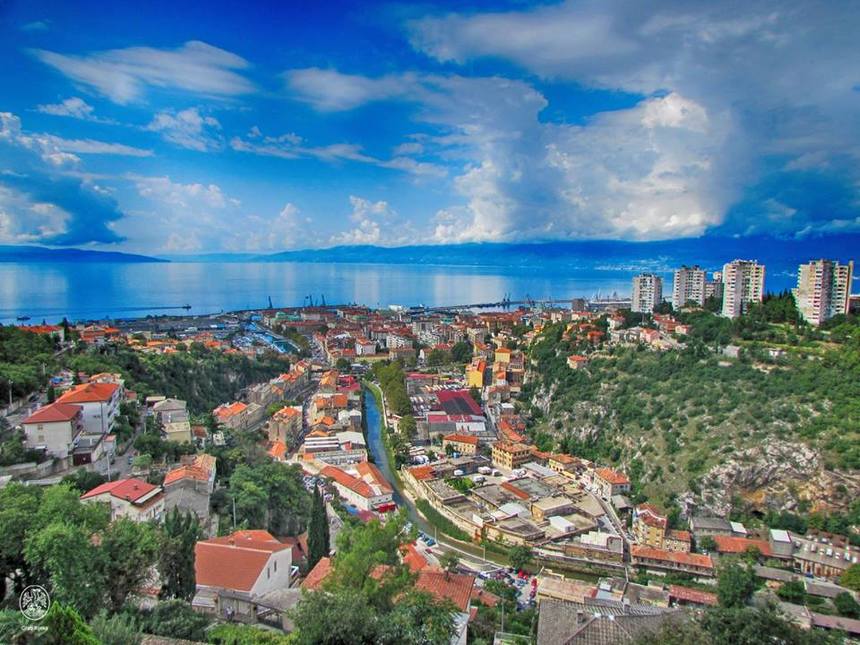 Rijeka is located on a mild geographical incline, encompassing a narrow coastal belt with plentiful sources of drinking water, in a sheltered bay that provides all the features of a natural port. The oldest traces of human presence in Rijeka reach back to Palaeolithic and Neolithic, with the remains of prehistoric constructions dating from Bronze and Iron age. The earliest settlements are Celtic Tarsatica and Tarsa settlement which has been established and inhabited by the Illyrian tribe of Liburnians.

During the Roman Era, as testified by numerous archaeological findings, this settlement was relocated closer to sea, along with the estuary of Rječina River, where the latter meets the Adriatic Sea. The first mention of medieval settlement dates from the 13th century when Rijeka was a fortified feudal city, surrounded by walls that incorporated several towers.

In the 14th century, Rijeka came into the possession of Devin Counts and subsequently came to be ruled by Frankopan Counts of Krk and Walsee Counts. In 1446 it fell under the rule of the Habsburg dynasty. In the 16th century, a Glagolithic print house was active in the city. At the time Rijeka flourished commercially, as a result of the developed trade with iron, oil wood, wool, cattle, and leather. Somewhat later, the trade diminished due to frequent Turkish raids and conflicts with Venetians.  At the onset of the 18th century, Rijeka became an important trading centre, hence in 1791 the Austrian Emperor proclaimed Rijeka a free port. As Hungary grew in power, it began demonstrating pretensions towards Rijeka as its own maritime centre.

In 1848, the City was directly annexed to Banska Croatia. However, in 1868, with the amendment of Croatian-Hungarian settlement, Rijeka – as a corpus separatum ­– was placed under the direct rule of the Hungarian government which began the speedy transformation of Rijeka into its biggest maritime port. After the downfall of the Austrian-Hungarian Empire in 1918, Rijeka became a city within The State of Slovenes, Croats, and Serbs. At the same time, Italy began showing aspirations regarding annexing Rijeka to Italy. The Paris Peace Conference declared that Italian military units must retreat from Rijeka. However, in 1920 Italian writer then soldier Gabriele D'Annunzio entered Rijeka with some of his adherents, occupying the city contrary to the will of the government in Rome. According to The Treaty of Rapallo between the Kingdom of Italy and The Kingdom of Serbs, Croats, and Slovenes and following the defeat of D'Annunzio, Rijeka became The Free State of Rijeka that was recognized by all the world powers. As such, it existed until 1924 when, because of The Treaty of Rome, half of the city was given to Italy and half to the Kingdom of Serbs, Croats and Slovenes.

In the ensuing years, Rijeka took part in the military fight against fascism and during the WWII was a part of the antifascist alliance. After the Italian capitulation in 1943, Rijeka was occupied by the German military, only to be liberated by units of the Yugoslav Army on 3 May 1945. After the end of WWII and upon signing of the Paris Peace Treaties in 1947 Rijeka was given to the state of Yugoslavia, where it continued to develop as the country ’s principal port. At the time, Rijeka’s industries included shipbuilding, production of paper, ship engines, machines, and textile, as well as oil refining. From 1991 onwards Rijeka is a city within the Republic of Croatia. Namely, in 1991, The Republic of Croatia issued The Declaration on Independence, proclaiming sovereignty and cutting all the state and legal links with the Socialist Federative Republic of Yugoslavia.

Presently, Rijeka continues its development as an important transport, maritime and university centre. The number of tourists visiting the city is on the rise. In 2020 Rijeka will become The European Capital of Culture.

Rijeka is the third-largest city in Croatia and is the administrative centre of Primorsko-Goranska county. The city has 128 624 inhabitants. Together with Rijeka's surrounding metropolitan area, this number climbs to 250 000 people. Due to its favourable geographic position and a Deepwater port, Rijeka has been one of the biggest European ports and a powerful industrial centre throughout its history.

In the new millennium, besides developing its port and its traffic corridor, Rijeka turned towards developing its university, tourism and service sectors. Currently, Rijeka is recording positive results in all areas: from economic indicators to the development of expert and scientific domains, to sports and culture. Rijeka holds the title of the most transparent Croatian city. A successful and modern city, Rijeka won designation as European Capital of Culture 2020.

Currently, Rijeka experiences an ascending trend, with the number of entrepreneurs rising for three years in a row, along with the number of employed individuals and total economic income. Rijeka’s economic structure is dominated by small and micro-entrepreneurs, who partake in the total income with a high percentage of 45 % and, as such, represent the strongest growth generator in Rijeka's economy.

Five most significant economic branches in Rijeka include processing industry, constructing, trade, transport, and storage along with various expert, scientific and technical branches. Together, they realize 84% of total income, while their average growth amounts to 6%. A large percentage of income growth is achieved by entrepreneurs in the increasingly important branch of tourist accommodation and catering.

In comparison to other large Croatian cities, Rijeka’s entrepreneurs are amongst the most successful. Thus, according to the rated economic quality, the realized net profit per employee is just behind that of Croatian capital of Zagreb, while in terms of profitability Rijeka is the leading city in Croatia. Rijeka’s entrepreneurs' export indicators place them in the second place in Croatia, right behind Zagreb.

RIJEKA - THE RHYTHM OF THE CITY 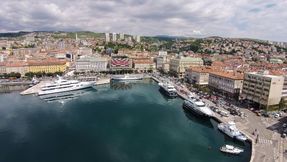 Rijeka is a city with rich history and dynamic present, offering new perspectives with excellent connections by road, boat, rail or plane.

A must visit are the very centre of the city and the always vibrant central promenade, Korzo. Rijeka has numerous cafes and restaurants with excellent gastronomic offers and clubs where the party goes on until late at night for young people.

The cultural calendar of the city is full of events throughout the year so visitors will find interesting and attractive music, drama, art performances, as well as urban clubs for the younger generations that offer their kind of entertainment.