The first mention of the settlement, created on the path leading from Bohemia to Lusatia, dates back to 1352. It received the German name Reichenberg, from which the Czech name Liberec most probably evolved a few centuries later.

The aristocratic Redern family, which owned the Frýdlant and Liberec estates from the middle of the 16th century, first contributed to the development of Liberec. The town later gained the right to brew beer and hold its own markets and in 1577 Emperor Rudolf II awarded the city its emblem, which is still used today.

Under the Rederns, the tradition of textile production (cloth and linen) started in Liberec. It was further developed by another of the owners of the Liberec estate - military leader Albrecht of Wallenstein.

He also founded the New Town of Liberec with corresponds to today's Sokolov Square. After Wallenstein's violent death, the Gallas family acquired the manor and also supported the business of the citizens of Liberec.

In the second half of the 18th century, textile production flourished in the Liberec region, but the original domestic production ceased to exist with the establishment of large manufactories. The XIX century in Liberec is clearly marked by this development. At the turn of the 19th and 20th centuries, industrial Liberec was the second most populous city in Bohemia and was nicknamed "Czech Manchester" or "Vienna of the North".

The beginning of the 20th century was the "golden age" of old Liberec, where the city centre and a number of public buildings were completely rebuilt. There was also a massive development of tourism and its belonging infrastructure (lookout towers, cottages, marked paths) in the surrounding mountains.

The positive development was stopped only by the First World War, as after its conclusion the development of the city was no longer so dynamic. After the war, Liberec residents of German origin were relocated to Germany.

The establishment of the communist regime then led to stagnation. The situation changed fundamentally only in the early 1990s, when Liberec miraculously continued the development that ended before the First World War: the historic centre was very quickly renovated, a number of public buildings were added, tram lines were restored, great care was given to infrastructure and ecological problems.

Liberec is a statutory city in Czechia, administrative, educational, cultural and economic centre of the Liberec region. Today's Liberec covers an area of ​​106 square kilometres and has a population of about 106,000 inhabitants.

Liberec is located about 91 km north-northeast of Prague and about 99 km north-northwest of Hradec Králové. The town lies in the Liberec basin of the Zittau Basin between the Ještěd-Kozák ridge and the Jizera Mountains.

The traditional industry in the city has always been related to textile - especially cloth and linen, although it has been in decline since the 1990. The company INTERLANA and Elmarco producing nanofibers are to mention.

Since the 1990s, Syner has gradually become the dominant construction company in the region, who built the Liberec multifunctional hall. 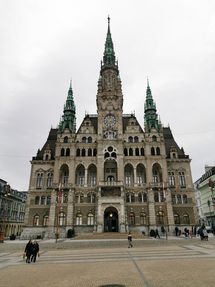 Valuable architectural monuments include the Liberec City Hall, the Imperial Spa and the Wallenstein Houses. Liberec lies on the edge of extensive forests and literally just a few steps separate the centre from nature.

Liberec is increasingly sought after by summer sports addicts, especially cyclers. Liberec's recreational opportunities are surprisingly rich, as the city is surrounded by numerous forests with many water basins.