Largest glass recycling container in the world installed in Vitoria-Gasteiz

In celebration of its commitment to Sustainable Development Goals 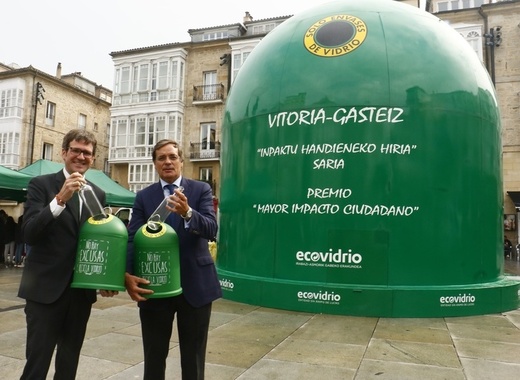 The city of Vitoria Gasteiz boasts the largest glass recycling container in the world. It was installed last week to celebrate an important recognition received by the Basque capital. At the 20th edition of the Ecovidrio Awards Vitoria-Gasteiz was awarded the ‘Greater Citizen Impact’ Award for its long history in fighting against climate change and the promotion of the sustainable development goals (SDG).

The item symbolizes the effort and perseverance of the Vitorians with the use of glass containers. It is an 8-meter-high igloo which serves as a testimony to citizens, the city's hospitality sector and public administration and their work in the fight against climate change.

According to a report prepared by Sustainable Development Solutions Network (REDS) in 2018 Vitoria-Gasteiz was the Spanish city with more than 80,000 inhabitants best positioned in the achievement of the Sustainable Development Goals. The Basque capital’s success was highlighted in two indicators: SDG 6 (water and sanitation) and SDG 12 (production and responsible consumption).

Gorka Urtaran, mayor of Vitoria-Gasteiz recalled that his city recycles an average of 22 kilos per inhabitant annually. In 2018, 5,481 tons were collected. In the short term, among the new actions envisaged in this area, the increase in recycling containers stands out, which will go from the current 700 to 1,100 in 2021. The door-to-door collection points in the hotel industry will also increase and more mouth containers will be placed.

The Vitoria-Gasteiz City Council will collect the Greater Citizen Impact award in November from Ecovidrio, a non-profit organization in charge of the management of the recycling of glass packaging waste throughout the Spanish state. However, this is far from the first thematic recognition for the Basque city as it won the title of European Green Capital in 2012 and is also a winner of the Global Green City Award, granted by the Global Forum on Human Settlements, sponsored by the United Nations.