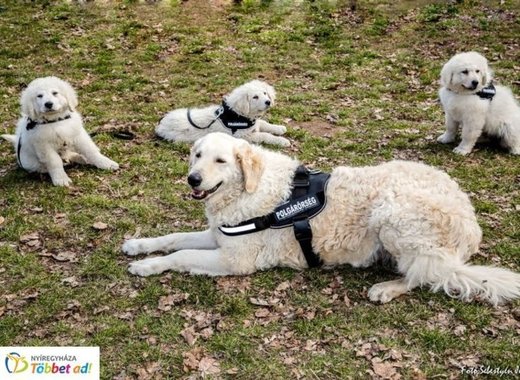 The Nyíregyháza Criminal Law Enforcement Association received a Kuvasz dog from the Agrarian Ministry a few days ago. The dog came to the Hungarian city as part of a breed rescue program and will soon be in training, report the local authorities. It is planned that it will play a major role in law enforcement, by warning drug dealers, pickpockets and robbers. The ministry cooperates with the National Civil Guard Association and has already donated five puppies to rural civil guard organizations. Avar is one of them and he went to Nyíregyháza.

Avar is three months old, playful and extremely friendly. He will soon undergo serious training to take an active part in the work of the civil guards later on. In a few months, he is expected to become a large, fearless canine actively involved in law enforcement. Over time, it will become clearer how well the guards will work with the dog. For the time being, however, the puppy is not an active participant in law enforcement, but rather melts the hearts of the locals.

The Kuwaiti dog is an ancient Hungarian breed which currently is part of a breed rescue program. The breed was initially used as royal guard dogs, which over the last decades is increasingly found in homes as pets. According to 1986 figures, nearly 2,500 dogs from the breed were registered. As of last year, however, there are only about 200 dogs and that is why the local authorities considered it important to start actions to protect them.