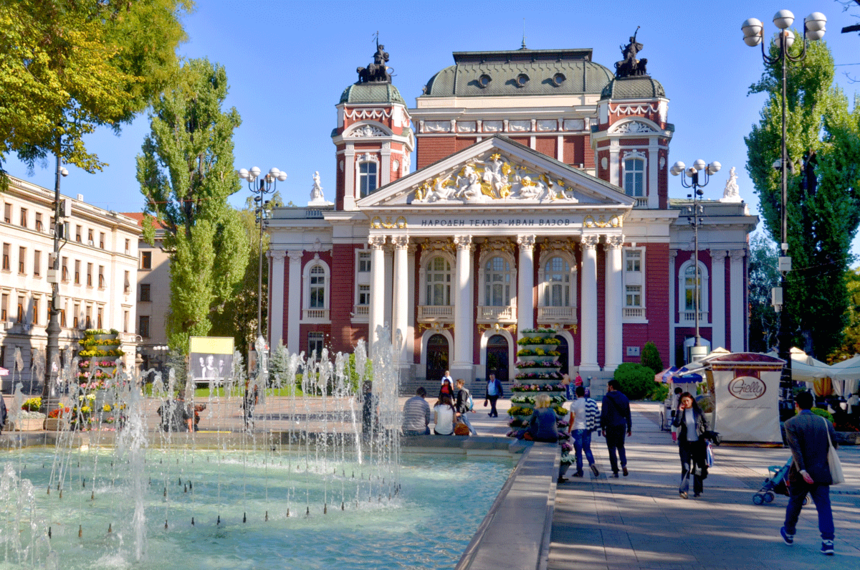 After the north-eastern parts of Bulgaria where the capital of Preslav was locater,were conquered by Byzantium in 972, Sredets became a temporary capital of the First Bulgarian Empire. The Bulgarian Church, headed by Patriarch Damyan, moved here from Drastar City (present-day Silistra). There was a time of continuous economic and cultural growth for Sredets during the Second Bulgarian Empire (1194-1382). The city grew and got its final appearance of a typical medieval city. The streets became narrower, buildings with a typical brick and stone construction appeared, new small churches were erected, and in its vicinity, mostly on the slopes of Vitosha and the Balkan Mountains, many monasteries were constructed. In the last decades of the 14th century, the city took on its present name - Sofia, after the basilica that arose nearby. In 1382, after a three-month siege, Sofia was captured by Ottoman conquerors. Following the liberation of the city from Ottoman rule (04.01.1878), a year later - on 03.04.1879, the First Constituent National Assembly unanimously chose Sofia as the capital of the restored Bulgarian State. In 1879, the first urban development plan of Sofia was drawn up. It transformed the outlook of the city and shaped to a large extent the appearance of today’s city centre. Some of the most prominent architects and builders of the time were attracted from Europe for the construction of the new capital.

Stolichna Municipality is an administrative and territorial unit which has the status of a region. Stolichna Municipality comprises 38 populated areas, 4 of them the following cities and towns: Sofia, Bankya, Buhovo and Novi Iskar, as well as 34 villages. Sofia is divided into 24 regions. The regional mayors solve the problems arising from the everyday needs of the population according to their place of residence, the administrative servicing of the citizens, the city/town development, sanitation, etc. The city is situated in the Sofia Field at an altitude of about 550 m above sea level. The region is rich in mineral water.

Sofia is the main administrative, industrial, transport, cultural and university centre of the country, and 1/6 of the industrial production of Bulgaria is concentrated here. Sofia is the largest industrial centre of Bulgaria. There are around 800 big enterprises on the territory of the city. 75% of the steel industry, 50% of the printing industry, 15% of the electrical and electronics industry, 14% of the fur and footwear industry in the country are concentrated in Sofia. Chemical, textile and food products are also manufactured. The construction, trade and transport sectors connecting the material and social infrastructure of the big city are highly developed. The private sector on the territory of Stolichna Municipality is concentrated mainly in the spheres of trade and services. 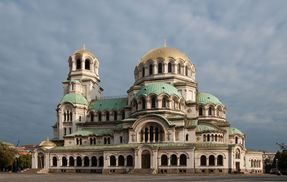 Tourists can see the exhibited remains of the Eastern Gate of Serdika - Sredets, dating from the 2nd-14th century. The remains are situated in the subway between the Presidency and the Council of Ministers. One of the oldest churches in the capital is the Saint Sofia Basilica, built in the time of the Byzantine Emperor Justinian (527-565). It was the main temple of the medieval city, during Ottoman rule it was turned into a mosque. St. Aleksander Nevski Memorial Temple is one of the symbols of the capital. The temple was built in 1912 under the project of the Russian architect Aleksander Pomerantsev. Its bell tower rises to a height of 53 meters; it has 12 bells, the heaviest of them weighing 10 tons. The oldest temple in Sofia is the St. George Rotunda. It is believed that it was built in the 4th century, during the reign of Emperor Constantine the Great. Just near the Rotunda is the Saint Petka Samardzhiyska Temple, built in the 11th century. Another Christian landmark in the area is the Saint Joseph Catholic Cathedral. The National Archaeological Museum is located in the area with religious landmarks and just opposite the Presidency. It houses some of the most valuable treasures found in Bulgaria. Nearby is the National Museum of Natural History that houses stuffed, extremely valuable, even extinct plant and animal species. Right next to the Museum is located the St. Nicholas Russian Church that is impressive with its architecture. The popular Vitosha Boulevard is among the favourite places of the guests and residents of the capital. Here, one can find shops of world brands and its status of a pedestrian zone makes it a pleasant place for a walk and recreation. The shopping opportunities in the city are many and varied - some of the biggest shopping centres on the Balkan Peninsula can be found here.