The European Union is not just an institution: it is us and it depends on our devotion

The Director of the European Centre Schengen Martina Kneip on free movement, the historical agreement and tourism 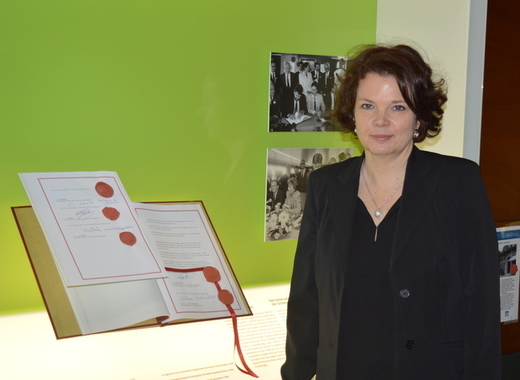 Martina KNEIP is the Director of the European Centre Schengen. She is part of Schengen asbl, a non-profit organisation, supported by the communes of Schengen and Mondorf-les-Bains, the City of Remich, as well as the Ministry of Economy and the Ministry of Foreign and European Affairs of the Grand-Duchy of Luxembourg. The organization manages the European Museum Schengen, the Tourist information office and the information centre "Europe Direct", which mediates between citizens and the European Commission.

Ms. Kneip, according to you, three decades after the signature of the Schengen Agreement, what is the interest for the village and the belonging tourist sites?

"Schengen" is synonymous with a Europe without borders. Today our little village is known worldwide. In Europe thanks to the Schengen Agreement, outside Europe thanks to the "Schengen Visa". On the other hand, Schengen is located on the banks of the Moselle River and is part of a tourist region, the only wine region in the Grand Duchy.

With our reputation we are a kind of gateway to Luxembourg in general. Thanks to the geographical location in the tripoint of Germany, Luxembourg and France, borders have always played an important role.

What is the profile of visitors to the centre and what are the most frequently asked questions?

Last year we welcomed more than 40,000 visitors to the European Museum and 38,000 visitors to our tourist information office, but we estimate a large number of tourists who stay outside of the museum area. The majority of people come from the European Union but we have seen a lot of people from Asia and other regions.

Perhaps the most frequently asked question is: Why such a small village has been chosen as the place of signature of the agreement? And then: What is the difference between the European Union and the Schengen Area?

(Editor's note: the answers can be found at http://www.visitschengen.lu/ )

Could you explain why this centre is important locally and how do you cooperate with local governments?

The European Centre is a landmark for the entire region and its population ... The museum with the bistro and especially the tourist information office are a key element for the social life of the town and especially the village of Schengen. We cooperate closely with the municipality of Schengen but also with the neighbouring municipalities (Mondorf-les-Bains and Remich) who also subsidize us. Cultural and tourist cooperation also exists with municipalities in Germany and France.

The village of Schengen has been selected for the 2018 European Heritage Label. Could you explain in what Schengen is an example?

The free movement of persons is one of the four freedoms of the European Union and the Schengen Agreements symbolize a key element of the development of European integration. Open borders are part of our daily lives.

What changes does this distinction bring to a small village?

Schengen is the first site in Luxembourg having received this label. This gives us more notoriety and increases the visibility of the site.

Your organization also manages the Europe Direct centre. What services and information does it provide to European citizens?

The Europe Direct Schengen Information Centre is part of a network of around 500 information centres throughout Europe. We act as an intermediary between the European Union and citizens at the local level. This allows citizens and visitors to the centre to obtain information on EU policy, for example by distributing brochures adapted to the general public and raising awareness for the news (such as the elections in May 2019). We are the first point of contact for all kinds of visitor questions.

Finally, our portal TheMayor.EU performs a similar role: it aims to facilitate the connection between local institutions and their citizens and to make more visible the good practices of the European municipalities. From your perspective and experience, why is it important?

EU policy has a positive effect in many areas of our daily lives. It is important to demonstrate that the European Union is not only an institution but that the EU is us and it is for everyone to devote themselves.