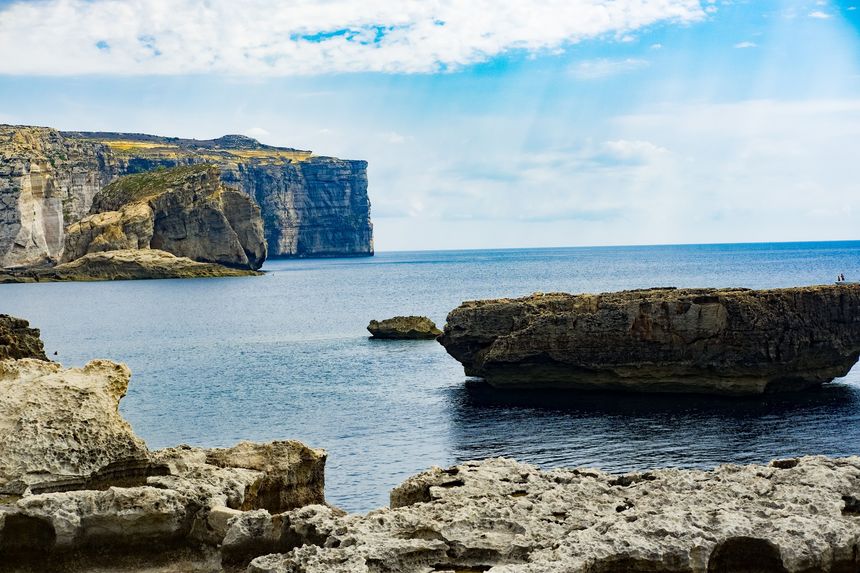 The year of the establishment of the village of San Lawrence is unknown, but there are documents that mention Ta' Ciangura and San Lawrenz before the Great Siege of Gozo which occurred before July 1551.

It is known that the parish of San Lawrenz was founded on 15 March 1893. Before this date the village was known as Ta' Ċiangura, but the area was always referred to as “San Lawrenz”. The latter derives from the name of an old chapel dedicated to Saint Lawrence and the devotion which the people of the area have always held.

San Lawrenz is the only village in Gozo named after a saint. By the 4th century AD, the devotion towards Saint Lawrence had spread worldwide and had also reached the shores of Gozo. Before the end of the middle ages there were three churches dedicated to Saint Lawrence, one inside the Citadel, one near Ta' Ghodlien and another at Ta' Ciangura. The village assumed the name from the church.

San Lawrenz is a Maltese village located in the west of the island of Gozo, governed by one of the 14 Local Councils in Gozo.

The village is built on a flat surface surrounded and is surrounded by three hills - Ta' Ghammar, Ta' Gelmus and Ta' Dbiegi. The latter is 195 metres above sea level which is the highest point in Gozo.

Until to the Second World War most of the locals were farmers, but today many of them are either employed by the government or are self-employed.

The Geology of Dwejra Bay 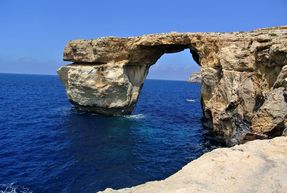 Vir: The Azure Window, or the Dwejra Window, one of the most-famous landmarks of Malta collapsed due to a storm in 2017 / Pixabay

The name of this bay stems from a small house which was built on the cliffs surrounding the inland sea.

The bay boasts rare geological features, both on land and underwater, rich and diverse wildlife and habitats, dramatic seascapes dominated by a rocky shoreline and a general wilderness feel. Dwejra is renowned not only for its interesting geology and also for its fascinating underwater scenery.

The Dwejra area is made up of marine tertiary sedimentary rocks deposited around 24 million years ago. Here one can also find Globigerina limestone, lower Coraline limestone and even some blue clay.

Dwejra is a popular place for diving as divers can explore the underwater caverns and admire the particularly interesting marine fauna in the crystal-clear waters.

Most frequented diving locations in Dwejra are the Hofra tal-Bedwin or the Blue Hole which goes deep into seabed just in front of the Azure Window, the Coral Cave located at a short distance from the Fungus Rock, and the area near Fungus Rock where divers can marvel at the variety of marine life and explore the cliff walls, small caves, and two plateaux.

Dwejra Bay is a preferred filming site by producers and directors for internationally renowned and famous films and productions, including Clash of the Titans (1979), Christopher Columbus – The Discovery (1992), The Odyssey (1997).

The Inland Sea known locally as Il-Qawra, constitutes the lowest spot of Gozo. It is an expanse of shallow water set in a deep recess in the rock coastline produced by the caving in of the surface above subterranean caves.

The pool is connected to the outside sea by means of a narrow, sixty-metre-long tunnel to the cliffs. This only entrance for this pebbly lake is called Ghar iz-Zerqa (Blue Cave) because of the colour of the sea within and around it.

With small fishing boats one can travel out to the sea through the tunnel and visit Fungus Rock, where Medieval knights grew medicinal plants. 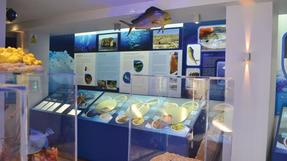 The Environmental education centre is situated just a few metres away from Dwejra’s inland sea. A visit to the centre is the best way to get informed about the vast and varied underwater world of the Dwejra area. With lots of photography, information boards, and 3D models, or dioramas, the centre interactively recreates specific underwater ecosystems. 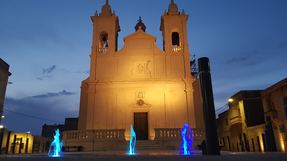 Three altars can be found within the church: that of Saint Lawrence, that of Saint Pius X, and that of the Sacred Heart. The latter was designed by Michael Camilleri Cauchi and sculptured by Ronald Pisani.

With the passage of time the church has been furnished with many precious works such as the font for baptism, the confessional, marble paving and other artistic pieces. Today it has become one of the most beautiful baroque churches on the island of Gozo.