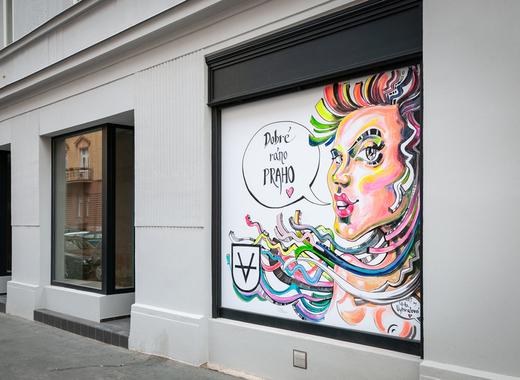 Major buildings in the centre of Prague were covered with graffiti by well-known artists. The aim of the Prague Property Management event was to raise the profile of street art and have it considered a real art. The Prague City Hall will now try to identify, together with the city districts and the company, the suitable places where new areas for legal graffiti could be created.

One of the walls decorated with graffiti as part of the prohect. Photo: Praha.eu

“The company drew attention to two phenomena - the quality of the often underestimated street art and the negative impact of uncontrolled spraying on buildings. It thus touches, in general, on the topic of the relationship between art and architecture in the public space. Repression should always be used as a last resort, so I am inclined to search for legal areas for graffiti and I expect that the community of graffiti artists will help the city eliminate works that have nothing to do with any art”, explained Deputy Mayor Hlaváček.

“In my opinion, illegal graffiti is one of the worst forms of visual smog in Prague, which damages the property of private individuals and the city…On the other hand, street art belongs to the city and in a few cases it can aesthetically elevate some of the less well-kept corners of Prague, but only if it is a true artistic creation. For these cases, I am happy to support the selection of legal areas owned by the city” added councillor Jan Chabr.

The capital has been struggling with illegal graffiti for many years and establishing areas for legal graffiti could help reduce damage to buildings owned by both Prague and private individuals.