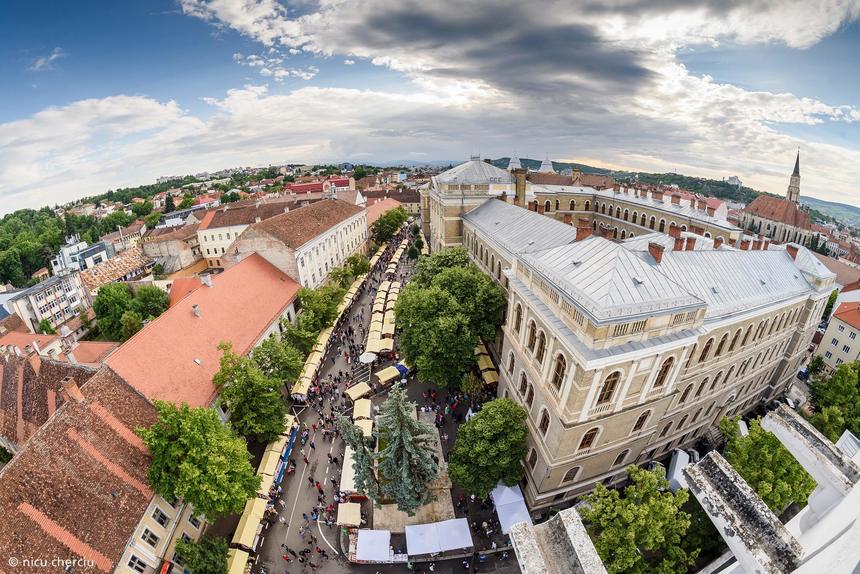 Cluj-Napoca is the capital of the historic region of Transylvania. The city is the largest in the Nord-Vest development region, equalized to the NUTS-II regions in the European Union. The population is over 412,000 inhabitants, and besides Cluj-Napoca, there are 17 communes.

The city is divided into 15 districts laid out radially. The local government intends to develop local administrative branches for most of the districts. Because of the last years' massive urban development, some areas of Cluj were named as districts, but most of them are still construction sites.

The city hosts the palace of the prefecture, the headquarters of the country council and the prefect, who is appointed by Romania's central government. The prefect himself is not allowed to be a member of a political party, as his role is to represent the national government at the local level, acting as a liaison and facilitating the implementation of National Development Plans and governing programmes at the local level. Much like all the other local councils in Romania, the Cluj-Napoca local government,  the county council and the mayor are elected every four years by the population.

Much of Romania's software/IT activity is centralized in Cluj-Napoca, which is quickly turning into the country's technopolis. Nokia invested 200 million euros in a mobile telephone factory near Cluj-Napoca, it also opened a research centre in the city. The city houses regional or national headquarters  of MOL, Aegon, Emersen, De`Longhi, Bechtel, Friesland Campina, Office Depot, Genpact, New Yorker and Bosch.

Furthermore, Cluj-Napoca is an important regional commercial centre, with many street malls and hypermarkets. Eroilor Avenue, Napoca and Memorandumului streets rank among the most expensive venues.

Within Cluj-Napoca one can find a number of landmark buildings and monuments. Among them is the Saint Michael`s Church in Unirii Square, which was built at the end of the 14th century in the Gothic style of that same period. It was only later in the 19th century that the Neo-Gothic tower of the church itself was created - it remains the tallest church tower in Romania to this very day.

Cluj-Napoca also hosts a number of cultural festivals of various types. They occur throughout the year but are far more frequent during the summer months. The city boasts a diverse and growing cultural scene, with cultural life exhibited in a number of fields, including the Visual arts, performances and nightlife. The city's culture covers its entire history, dating all the way back to Roman times when the city's initial construction first began, leaving an ever-present mark on the urban layout (centered on today's Piața Muzeului) as well as the remaining ruins. However, in later centuries, the now medieval town saw a shift in its centre towards new civil and religious structures, notably St.Michael`s Church.