I want continuity, as my vision for the city spans over the next 30 years

Michèle Picard, Mayor of Venissieux, on the rights of women, social policy and her priorities 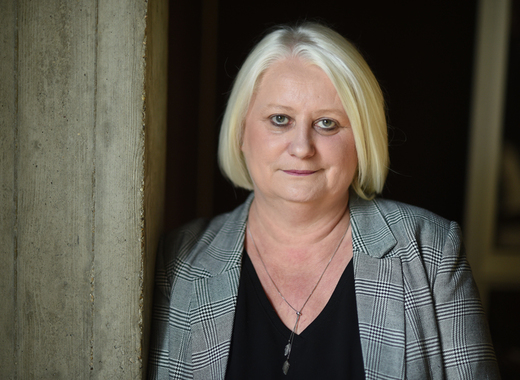 Born in 1967, Michèle Picard has spent all her childhood in Venissieux. She obtained a Bachelor of Applied Arts at the Lycée Jean-Paul Sartre in Bron. Following into the footsteps of her activist father from a young age, she joined the French Communist Party in November 1989. In 2000, Michèle became secretary of the Communist Party section of Saint-Fons.

Elected in 2002, then in 2007, Mrs. Picard was deputy alternate of the 14th district of the Rhone until 2012. Elected to the municipal majority in Venissieux in March 2008, she became deputy assistant for social policy. On June 27, 2009, she became Mayor of Venissieux, replacing André Gerin. In March 2014, voters opted for the party list she was heading.

Mrs. Picard, could you describe the city of Venissieux in a few words?

Venissieux is a large city of 65,000 inhabitants. It is a city with a rich history that begins in the Gallo-Roman era but also at the level of the Second World War. It is a popular city, industrial city and a city of solidarity, a welcoming land.

Venissieux carries the national label of quality of life "Flower City". What does this mean for its inhabitants and visitors?

We have been known for a very long time all over the world for roses in Venissieux. We had the largest rose growers who settled here late nineteenth and early twentieth century. For example, the yellow rose was born here.

We have always had the label "Flower City", but we had three flowers before. Since 2015, we have four and reward does not only concern the flowering. It also rewards the entire layout, the urban setting. I am very proud because it is part of our history and it also shows the quality of our public services.

It is a real political choice to have 80 gardeners who make the city bloom. I think living in a beautiful city is important. I hear the opposition say that it is better to focus on the social and I want to answer them: yes, but even when the poor have the right what is beautiful.

What is the Grand Parilly project and what stage is it at?

We have been working on the project for 10 years already. To start with, this is an agricultural land, a private terrain and a private developer. We worked a lot with them and the metropolis. I really wanted a living area there. At the beginning of September, the Ikea brand opened its doors, but there will also be Leroy Merlin, a tertiary office building; there will be housing, there will be a hotel, there will be a student residence.

We are also fighting for an EHPAD (residential care facility for dependent elderly people). We are trying to obtain the approvals of the Regional Health Agency and to have medical professionals with a health pole. It will have a nursery, public facilities, public organizations like Social Security.

Could you say a few words on the convention between the cities of Venissieux and Saint-Fons and the association Viffil-SOS Femmes in terms of emergency housing for victims of violence?

Women’s rights have always been a priority for the city of Venissieux. I rely strongly on continuity. You have take history into account. In the post-war liberation committee here, there was a woman who became deputy mayor. She is the first woman to become deputy mayor. The right of women and the visibility of women in the public space have always been a priority. Since I became mayor, we have named many streets with women's names. The last school group, for example, has the name of a woman, Flora Tristan.

And then, before becoming mayor, I was assistant to social policies, fight against extreme poverty, old people and the rights of women. There is violence and all the rest, but I think that when you take a subject, you have to take it as a whole. That's why I'm also talking about women's visibility in the public space, because it's important and it all goes together.

A few years ago, we set up emergency housing. In France, when you have women who are victims of violence, you have to work with the police offices and then with the House Social Care. However, to get into the system of sheltering, sometimes it takes a bit long. And we have women who filed complaints, who were facing a violent spouse, who could not leave quickly.

So, we created a housing unit before having them enter into asylums, an emergency housing unit managed by the City, in order to respond urgently to an urgent need. But we had seen that every time they took shelter, there was the violent spouse who was not far away.

This accommodation lasts up to six months and we have an agreement with the association Viffil-SOS Women to accompany 25 women while they wait to enter the sheltering procedure.

What is the appraisal of your mandate so far? Which projects or initiatives in your governance are most important to you?

I do not have an initiative or a project I am most fond of. The local mission, to make it visible for all our young people who are in difficulty, for me it is important. Creating or expanding school groups is also important. Creating a new central kitchen, with production and public control of school catering, for me is important because it allows us to have control over the public health issue.

I cannot oppose things: childhood to youth or to the elderly. For me this is all important. Otherwise I would feel as if I were not the mayor of the entire city, knowing that those under 20 years represent 30% of the population and those over 60 years, represent 15%. I do not oppose the projects, for me they are complementary.

What are the main objectives that motivate you to go to the municipal elections in March 2020?

First, it's a continuity: it's been more than 80 years since communist mayors follow the same project. When I became mayor, I said it was a page turning, but it was the same book. And indeed, I think that a city is not built in 6 years.

I have projects and the city is taking shape over 30 years. A mayor is obliged to look much further. A mayor must have a long-term vision of the city. And, yes, I think I have a vision of the city, this is why I am running again. I have projects and goals for the city and then, I also want to block the road to some opponents who for me will be toxic for the general interest and for the inhabitants

On the other hand, we also have a difficulty, the reduction of the financial means allocated to the municipalities and what is called the contracting with the State. Hence, we have been obliged to pay attention to operating expenses and it's difficult to develop new missions. Whenever we develop a new mission, we have to look for funds.

So, despite the significant budget constraints, we try to continue to develop the city, the crèche places, school groups, public facilities. We have many labels that have come to reward the work of the city. We have received the label "active and sporting city", which illustrates the quality of our equipment and services to the public.

But when I say "the city" it is the work of the officials and the political choices we make, the elected officials. So for me, we must continue what has been initiated already.