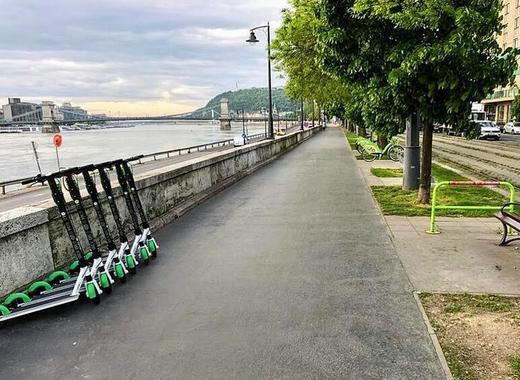 Electric scooter rental company Lime, which has been operating in Budapest since July 2019 following a two-month test pilot, has just released its first half-year results. The figures have exceeded all expectations, Tamás Tóth, the firm's Hungarian representative told hirado.hu.

Since July, Lime e-scooter users in Budapest have traveled a total of 1.3 million kilometers. Average travel time decreased from the initial 16 minutes to 10 minutes. The share of foreigners using the service was 18 percent, meaning that it was used mainly by locals. According to Toth, Lime is receiving many requests to expand the service area. Lime does not provide service in several districts, including Downtown, where authorities disagree with Lime’s random parking practice and insist on 2 km/h speed limit.

On Mai 1st 2019 Lime became the first company to offer e-scooter sharing services in the Hungarian capital. With a fleet of e-scooters positioned along the banks of the Danube River and several other areas it joined the European Union’s Cities4People initiative, coordinated locally by the Municipality of Budapest.

The search for viable micromobility solutions has become of paramount importance for the Hungarian capital which has seen a 16 per cent increase of road vehicles over the past 5 years. This means that 100,000 additional cars now clog the city streets.

Lime says that, in line with international trends, most users consider the service to be complementary to public transport, with departure and arrival points close to public transport hubs. The number of scooters has not changed since the service was launched and depending on the weather, there are about 300 to 330 scooters on the street.

Toth pointed out that, despite user encouragement, the company will not start expanding its fleet in Budapest until the negotiations on the new Highway Code, which also affects e-scooter use, are over.

Máriusz Révész, Commissioner responsible for the development and promotion of cycling and active recreation, had prepared a package of proposals to amend the Highway Code with the help of NGOs and experts. The package was forwarded to the Ministry of the Interior and the Ministry of Information and Technology and progress was expected this year, Révész told hirado.hu.

Tamás Tóth said that Lime is operating on profit in Budapest from day one, and contemplates expanding its servive into rural cities. He identified Lake Balaton as a possible destination and expressed his personal desire to make the service available between Balatonfüred and Tihany, taking advantage of the Balaton bike path.

According to Lime’s operations manager there are also many inquiries from university towns in the countryside. However, he stressed that the company’s expansion plans will depend on the regulation of the sector.