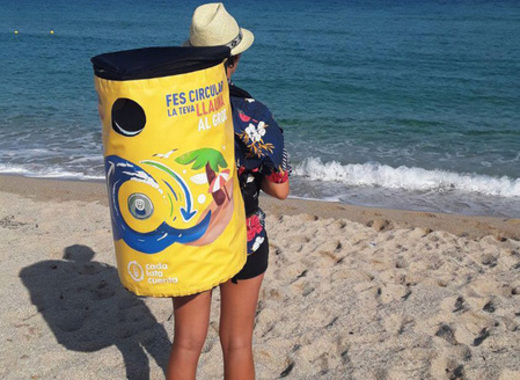 The City Council of Palma, Spain collaborates with the "Every Can Counts" (Cada Lata Cuenta in Spanish) campaign, the European environmental awareness program that has carried out this summer an important recycling awareness campaign. For almost two months it has been travelling across several beaches and now it is the turn of the beaches of Palma.

Under the title of "Make your can circulate to yellow" the campaign will continue spreading the message that the beverage can is an optimal container in the environment of the circular economy, hence it is essential to recycle it. Beverage cans are made of metallic materials that can be recycled infinitely without losing their properties. Each can of beverages that we recycle can become either a new one, or a different product such as a bicycle or a component of a space satellite, for instance.

The campaign's activists on the beaches will stress the importance of recycling cans. In addition, they will also carry a backpack for collecting cans to facilitate separate waste disposal on the spot. The campaign that started in 2009 in the United Kingdom is now present in 14 countries.

The gesture of depositing the metallic containers in the yellow container where they embark on a new journey is an important one to get used to. The circular process enables to save materials and energy. Thanks to recycling, 75% of the metals produced by mankind are being reused.

More information on the participation of the Spanish city of Palma here.