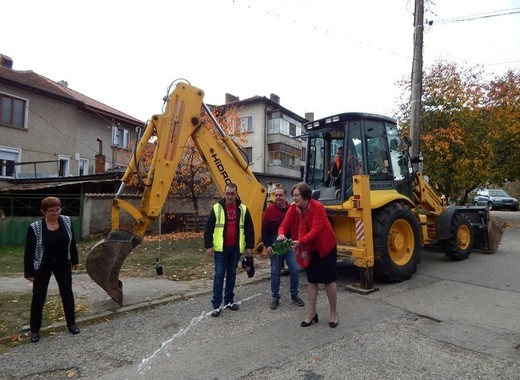 On the first day after taking office for her third term, Mayor of Troyan Municipality Donka Mihaylova broke the ground for the complete reconstruction of two streets in this Bulgarian town, the municipal press center reported.

The reconstruction of Stefan Karadzha Street and Zahari Zograf Street, together with their adjacent sites and facilities, is carried out under the Rural Development Program 2014-2020. The Municipality of Troyan is the beneficiary of the project with a total value of BGN 1 074 486, of which European co-financing amounts to BGN 761 094; national co-financing - BGN 134 310 and VAT - BGN 179 081.

"The streets of Stefan Karadzha and Zahari Zograf are two streets that relate to the lives of many of our fellow citizens and their current condition is not something that we can be proud of. That is why we are glad that we were able to receive the support of the State Agricultural Fund for their complete reconstruction, " said Mayor Donka Mihailova at the official ceremony, which marked the beginning of construction activities. She wished the project contractor - Transport Construction and Restoration company, a smooth reconstruction campaign, and appealed to the neighborhood to endure the inconvenience and experience satisfaction with the well-done job.

The streets under the project are named after revolutionary leader Stefan Karadzha, a hero from the struggle for the Liberation of Bulgaria from Ottoman rule, and icon painter Zahari Zograf, who is the founder of secular painting in Bulgaria and the author of the murals in the nearby Troyan Monastery.

The Mayor of Troyan Donka Mihaylova, the Troyan Municipal Council for the 2019-2023 term and the newly elected mayors of settlements officially took office on November 7.

"Trojans have always succeeded because they are enterprising and free people and this is an essential resource that we will try to use even more fully during the upcoming term," Mihailova promised during the solemn ceremony.

The mayor recalled the three important goals in her program, which gained her election for a third consecutive term in October: Retaining the level of employment in the municipality; raising citizens' incomes; achieving quality of life in a better living environment.

Troyan, the administrative and economic center of the municipality of the same name in Central Northern Bulgaria which is part of Lovech Region, is known for its archaeological heritage (the ancient city of Sostra), its school of ceramics and the world-famous plum brandy, to which a museum and a September festival are dedicated.