Dublin will have a metro line to the airport, in less than a decade

Dublin will have a metro line to the airport, in less than a decade

The government greenlit the first steps in the 9.5-billion-euro project to construct the long-awaited Dublin metro

Today, Irish authorities gave the green light for the planning stages for MetroLink, the project for developing a metro network in Dublin. After nearly two decades of political and planning limbo, the government is finally started moving towards establishing rapid underground rail in the capital.

According to an official statement, the metro will pass through Swords, Dublin airport and the city centre, terminating at Charlemont on the south side, offering a total of 16 stops. Some sources even claim that this will be the largest rail project in Ireland since the turn of the century.

Moreover, Minister for Transport, Eamon Ryan, went as far as to call it a ‘once in a lifetime’ project, as the addition of the metro will radically transform public transport in Dublin in the next decade, as the project will wrap up in the early 2030s. It will also take the Irish capital out of the small club of European counterparts that do not have a rail connection to their airports.

According to a statement by the government, the first line of the Dublin metro will be 19.4 kilometres long and will have 16 stops, being capable of carrying 20,000 passengers per hour. For comparison, the other highest public transport carrier in the Irish capital is the Luas – the local tram system – only able to move 9,000 people per hour.

The line will start off at Swords, a commuter suburb north of Dublin, pass through the airport, Ballymun, Glasnevin, the City Centre and Charlemont on the south side of the river. This route will connect the metro with the busiest transit hubs around the city, as well as with the urban rail system, the tram system and important bus points.

The government estimates that with the extended public transport connections, MetroLink will be able to serve close to 1 million people and 250,000 jobs, accessible by foot from the stations alone. 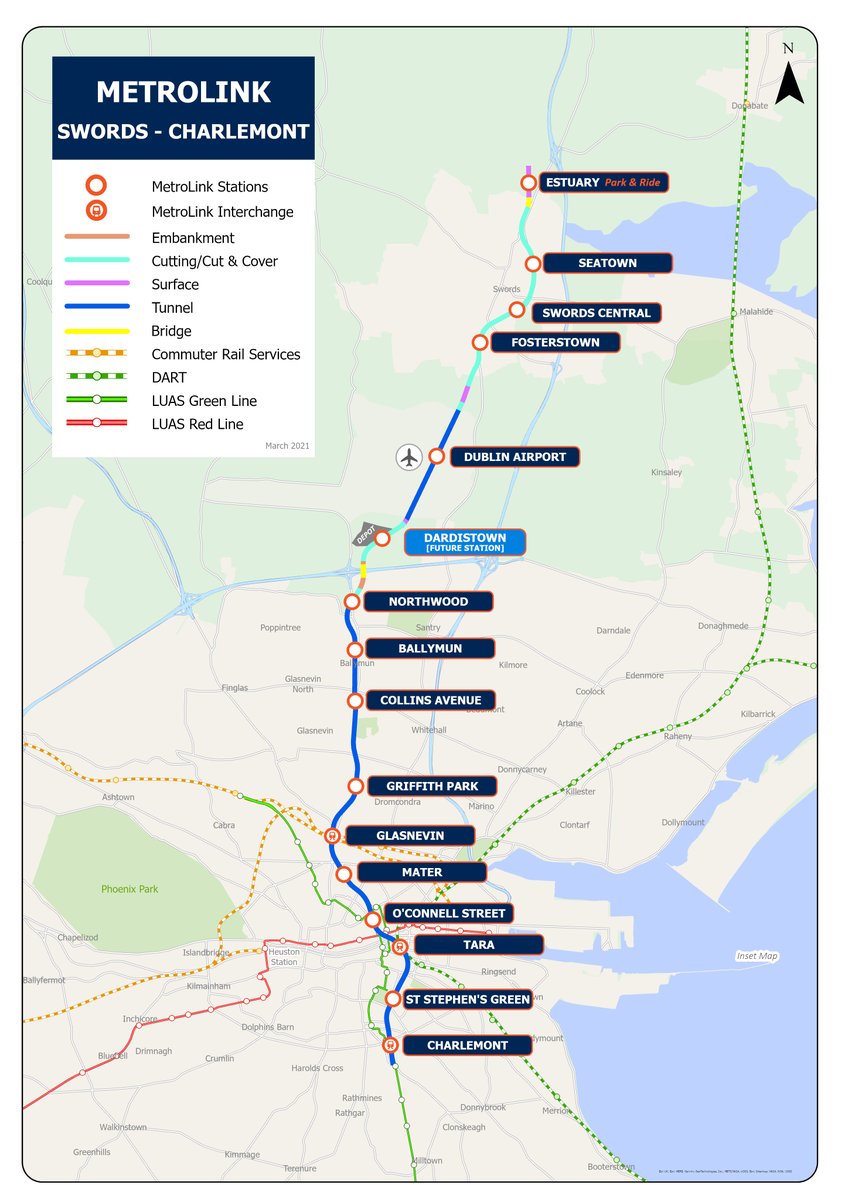 A map of the proposed metro route,
Source: Irish Department of Transport on Twitter

At the same time, the metro will also offer links with national railway and bus stations, offering direct connections to people from across Ireland. These factors would serve to create an interconnected transit system in the capital.

Anne Graham, the Chief Executive of the National Transport Association explained that this would encourage more people to get out of their cars and switch to public transport.

Of course, building a comprehensive metro network these days does not come cheap, with estimates putting the project cost at around 9.5 billion euros. However, with the stimulation of local economies near metro stations, and thanks to a travel time set at 25 minutes from end to end, the city and its population stand to gain a lot.

Estimates put monetary income from the development at 13.5 billion euros within 60 years after the start of exploitation. And deadlines seem to be approaching fast, as the government has said that construction should start in 2025. The entire thing should be complete in the early 2030s.

The megaproject should receive three-quarters of its financing from the government, while the rest would come from public-private partnerships, which is a great way to involve local businesses in developing the metro stations as inclusive public spaces.