In the future, you could live in the Guinness Storehouse in Dublin

Relying only on trust proves lucrative for a shop in Gdynia

Not only does it make profits, but it also corrects delinquent behaviour

Warsaw grants honorary citizenship to the Mayor of Kyiv

Vitali Klitschko promised that his fellow citizens will “defend democracy, stability and security of the whole of Europe against the barbaric Russian invasion”

In the EU, Luxembourg spends the most on R&D per inhabitant

According to Eurostat data, countries that spend less than the EU average, have grown their budgets the most in the last 10 years

Germany's 9-euro ticket might have led to more CO2 emissions

Barcelona will bid farewell to pedicabs

In fact, the measure will extend to the whole region of Catalonia as this type of transportation is deemed to be unsafe

A local pastor explained that the throat and the soul are linked, so a little wine could open the door to religion for some

According to experts, this is because many women do most of the unpaid work like taking care of relatives and raising children

Bicycle ambulances come to the rescue in Slovenian beach town

Paramedics on wheels have the ability to provide more mobile, flexible and rapid healthcare services

The Graz University of Technology (TU Graz) in Austria teamed up with the ARTI Robots start-up and the electric vehicle service ALVERI to develop “ALVERI - CharBo” – a robot capable of charging parked electric cars without human supervision.

The robot can move autonomously between the cars, recognize charging connections, and plug in. Electric vehicles are on the rise, and so is the demand for charging infrastructure. This creates a noticeable disparity, which this robot aims to fix.

Recently, the European Union has been pushing hard to fund an explosive transition into a more sustainable and green economy and infrastructure. This includes aggressive photovoltaic policies in Germany, a revitalisation of the rail network across the continent and even a veritable arms race between different countries to introduce hydrogen-powered vehicles.

Last week, Austria’s town of Krems an der Donau unveiled their first hydrogen-powered garbage truck, which cannot yet go into service because there are currently no hydrogen fueling stations in the region.

The case with electric vehicles is somewhat similar, but also different. This is due to the fact that the technology behind them is not that novel anymore and the idea of electric vehicles has been around for long enough to have some accompanying infrastructure present.

This helps for an easier transition - the presence of charging stations makes the purchase of an electric car seem more appealing because the infrastructure is already there.

At the same time, though, there are just around 8,000 charging stations in Austria and that is not enough.

Science is rushing to provide a plethora of infrastructure solutions

Helmut Brunner from the Institute of Vehicle Technology in TU Graz explained that the robot is designed for service-specific charging areas in multi-story car parks which will make the implementation of the technology much more realistic. 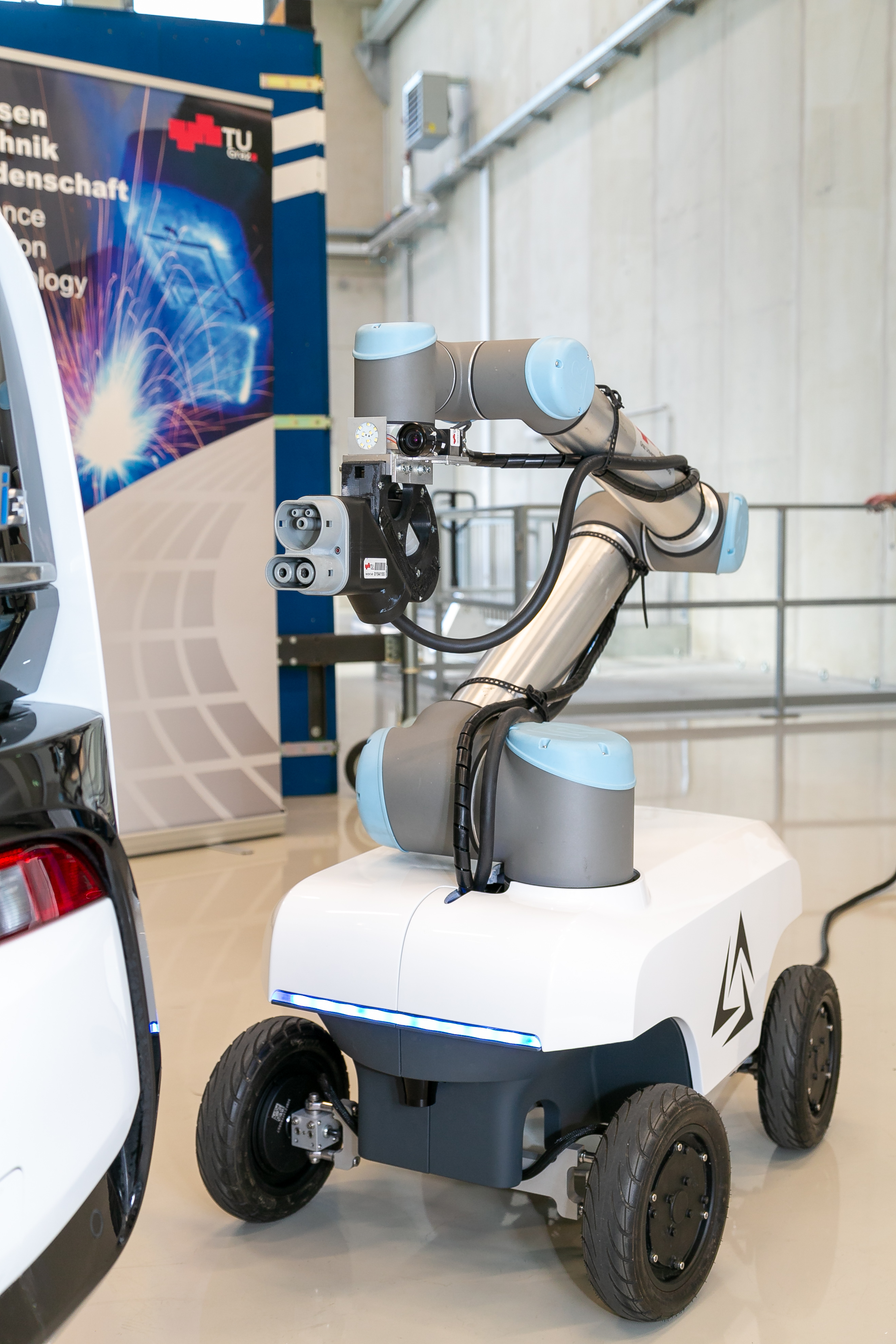 At the moment, the charging lid of the vehicle needs to be kept open, so the robot recognises that it needs to be charged. In the future, the team plans to remove this inconvenience, by establishing some sort of communication between the vehicle and the robot, either through an app or something else.

Before the charging robot goes into mass production, however, there are still a few improvements to be made. It is currently still attached to the power cable, because the integration of a battery to power its movement has not made much sense up to this point, according to the team. It would only increase the machine’s weight and cost, from a monetary and ecological point of view. The team is working on a power supply through ground contacts.

The software controlling the robot also needs to be integrated as currently, it is running on a separate PC.

This is all intended to make the use of electric vehicles much easier, as Brunner stated in a press release: “The idea behind it is very clear - to increase the convenience of electric mobility even further. It intends to free the user, the driver, from any concern about his range and from worrying about the state of charge of the vehicle."

Salzburg deploys water bags to help trees through the heatwave

Salzburg deploys water bags to help trees through the heatwave

Germany's 9-euro ticket might have led to more CO2 emissions

Barcelona will bid farewell to pedicabs

Munich will implement 100 measures for a zero-waste city