If the tests are successful, more locations could be covered with greenery 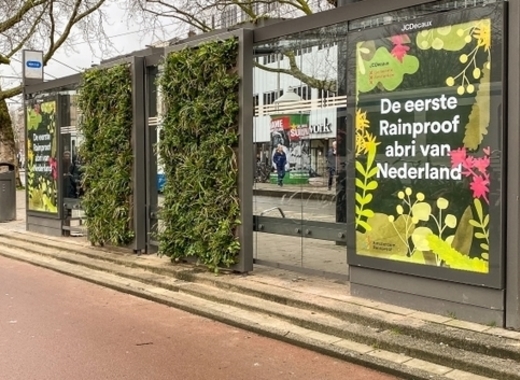 As of Tuesday 7th January, Amsterdam is testing green tramway stops. This week the first stop shelters – on Weteringcircuit and Marnixplein – were covered with greenery on the roof and walls, explained the municipality.

First rainproof shelter in the country

The newly designed stops have their own irrigation system that works on rainwater. There is a pump cellar in the ground where rainwater is collected and stored. The latter is then used to fully automatically water the plants in the wall. This makes it the first rainproof shelter in the Netherlands, we read on Amsterdam.nl.

Apart from an attractive and unusual design, the green roofs have their environmental purpose - they also collect rainwater that can be reused in periods of heat when rain is scarce and provide cooling. Also, the green roofs attract all kinds of insects, such as butterflies and bees, which increases the biodiversity in the Dutch capital, according to Amsterdam city authorities.

The green stops are a being implemented as a test part of a collaboration between the municipality of Amsterdam and JCDecaux. Over the course of a year, the partners will be monitoring whether the green shrubs serve their purpose as expected. If the experiment is successful, the possibility to increase their number at various locations in the city will be considered.

The measure is getting a mixed reaction from Amsterdam inhabitants. Many people raised concerns on social media that this solution cannot replace trees and sustainable forms of transport and advised that car-free central zones would do more good to the environment in such a big city.

Last year, another Dutch city became famous for a similar “green” solution. The city of Utrecht has completed a wide-scale installation of green roofs on its bus stops. 316 bus shelters were furnished with sedum-covered roofs with the objective to contribute to a healthier living environment. These bus stops feature LED lighting and 96 of them were outfitted with solar panels. They all have a bamboo bench and their base is made of recycled concrete. Finally, their maintenance will be carried out with electric vehicles.