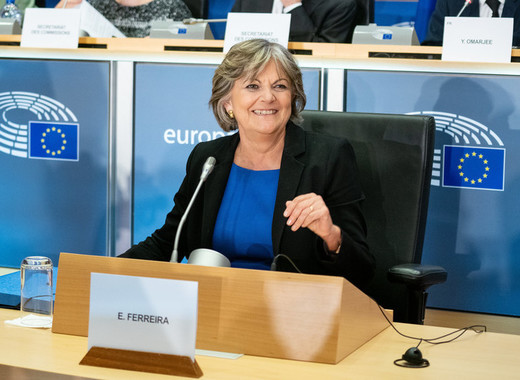 In what might prove to be one of the least controversial commissioner-designate hearings, Elisa Ferreira of Portugal managed to successfully court and satisfy the members of the committee quizzing her on subjects related to her portfolio.

Background of the Commissioner-designate

Elisa Ferreira was born on 17 October 1955 in Porto, Portugal. She has a rich political background, having served as a member of the Antonio Guterres government between 1995 and 2002. At first, she held the position of Minister of Environment and then transitioned to the post of Minister of Planning.

In 2004 she was elected as an MEP on the Socialist ticket. She served in the European Parliament until 2016, when she was nominated by the Portuguese government to join the board of directors of the Bank of Portugal. Earlier this year, in August, Portuguese Prime Minister Antonio Costa chose Elisa Ferreira as his pick for commissioner, making her the first Portuguese woman to be nominated for the post.

How the hearing went

The commissioner hearings started on Monday 30 October 2019. Usually a dull affair, this year’s edition is proving to be quite the opposite. With many of the commissioner-designated mired in scandals, being prosecuted for financial mismanagement and other similar transgressions, it certainly makes a good impression when a candidate comes around who barely has any alleged criminal activity to speak of.

Furthermore, Elisa Ferreira managed to charm members of parliament by displaying a thorough understanding of EU affairs mixed with professional experience in her areas of expertise.

When it comes to concrete statements, the Portuguese Commissioner-designate pledged to present the Commission’s plan in 100 days on how to secure funding to help industrial, coal and energy intensive regions in the EU. On the topic of the Just Transition Fund she explicitly stated that it will not be taking away funding from cohesion programs and will be a tailored combination of investments and social networks – heralding a paradigm shift for the EU’s regions.

Perhaps one of the most controversial statements made by Elisa Ferreira is related to the so-called “Troika Years” in Portugal. In the past she has heavily criticized the austerity measures imposed on her country but this time she managed to avoid lambasting the period by stating that the single currency needs better mechanisms to protect itself from crises, ones which do not rely on painful measures.

Nonetheless, the hearing ended with a resounding round of applause for the Portuguese candidate, sending the clear message that members of parliament were satisfied with her performance.

The hearings for the other Commissioner-designates will continue well into next week. On 17 October the Council of Presidents will decide whether the hearings are over and if Parliament is satisfied. If that comes to pass, MEPs will vote on the Commission as a whole on 23 October.