Forget the G-spot, the search for Vilnius continues!

The Lithuanian capital is launching a new tourist campaign, laughing at its own obscurity 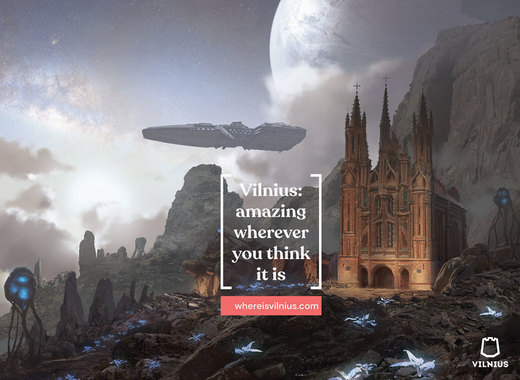 Following in the footsteps of the hugely successful tourist campaign “Vilnius – the G-spot of Europe”, the Lithuanian capital is launching a new campaign, titled “Vilnius: Amazing Wherever You Think It Is.”

The campaign, initiated by Go Vilnius, the official development agency of the city and created by Bechtle and Milzarajs ad agency, aims to draw more tourists by showcasing all the amazing aspects of the city through the lens of self-irony.

Centering the campaign on Vilnius’ obscurity compared to the leading travel destinations may be a cunning advertising tool, but it is supported by statistical data. According to a 2019 survey, conducted by Go Vilnius, only 3% of Germans, 5% of Brits, and 6% of Israelis know anything about Vilnius more than its name and approximate location.

A chance to win a trip to Vilnius

A campaign-dedicated website interspersed with surreal, fantasy-world visuals, asks visitors to guess where Vilnius is for a chance of winning a trip to the city while being informed of myriad reasons why it is so amazing.

Besides the website, the campaign will be airing, through social media and other channels, a playful video clip in which people on the streets of Berlin are asked if they know where Vilnius is. The answers vary from the Americas to Africa, except its actual location. Finally, billboards in London, Liverpool and Berlin will portray Vilnius reimagined in various fantasy worlds.

The campaign’s predecessor, the “Vilnius – the G-spot of Europe”, which claimed that “nobody knows where it is, but when you find it – it’s amazing”, made headlines across the globe. It received an International Travel & Tourism Award as the best advertising campaign at WTM London.