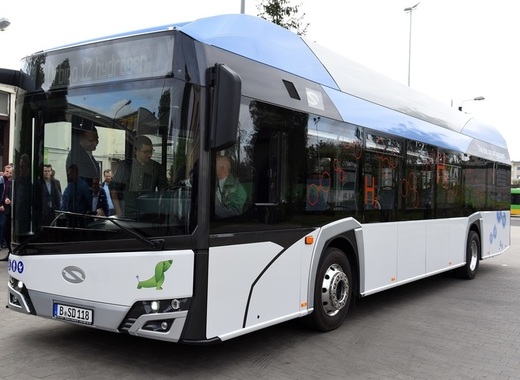 Earlier this month the first hydrogen-powered bus on the Polish market was presented before the Municipal Transport Company in Poznan. The Solaris Urbino 12 was shown for the first time in June during the UITP World Public Transport Summit in Stockholm and has been gaining popularity ever since.

In recent weeks the Poznan manufacturer's latest product has been tested by carriers in Austria and Italy. In August it was presented in Graz and Klagenfurt, and then went to Italian Bolzano. Later, the vehicle was trialed in Germany - in Frankfurt, Cologne and Wuppertal.

This is the vehicle of the future, believes Mariusz Wiśniewski, deputy mayor of Poznan. For the City and the carrier, i.e. MPK, it is important to focus on innovation and is worth showing what opportunities public transport opens for us, he continued.

Solaris's relationship with the Poznań MPK has been going on for over 20 years. And it is the capital of Greater Poland that is the first Polish city to witness the new product in use. Solaris are currently running 21 other buses for Poznan, explained Petros Spinalis, Vice President of Solaris.

The bus is equipped with a modern fuel cell, which acts as a miniature hydrogen power plant on board of the vehicle. Thanks to the technology used, the bus will be able to run as much as 350 kilometres on a single refuelling. Electricity in the hydrogen cell is created in the process of reverse water electrolysis. The only products of the chemical reaction taking place in the cell are heat and steam. The vehicle therefore generates absolutely no harmful substances.

A set of 60 kW fuel cells was used in Solaris hydrogen buses that guarantee the supply of hydrogen and air at the right pressure, for maintaining an appropriate and stable temperature of the cells during operation.

New in the Solaris portfolio is the small Solaris High Power battery, which is designed to support the fuel cell in times of greatest demand for electricity. The battery is charged with energy from hydrogen and by recuperation from the braking process. It is also possible to recharge it via a plug-in socket. The drive system is completed with an axle with integrated electric motors.

The hydrogen cell bus offers all the advantages of an electric vehicle, such as low noise and vibration, with no harmful emissions. Vehicles equipped with hydrogen technology are characterized by a large traveling range and short refuelling time and are considered a sustainable solution for cities.