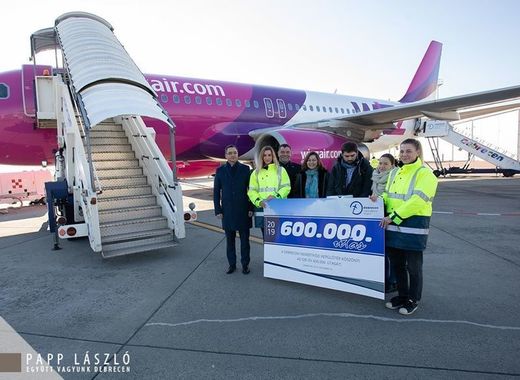 Debrecen airport, Eastern Hungary’s biggest air travel facility, will undergo major developments in 2020, Mayor László Papp announced at a press conference. Developments include the construction of a new firehouse, renovation of the airport terminal and procurement of passenger safety equipment.

Papp said that the Hungarian government is funding investment and development at the airport with 5.1 billion forints (EUR 15.4m) aid. Debrecen municipality is providing a quarter of the development funds.

On December 30th Debrecen airport received its 600,000th passenger. Commenting on the occasion, Papp recalled that the airport had launched its first regular flights in 2012 and had grown to service 380,000 travelers in 2018 as the country’s second biggest airport.

The municipality regained a majority stake in the airport in 2019 and will be launching tenders for the design of a new runway and a new terminal capable of handling 1.5-2 million passengers a year, Papp said.

Major investment projects have been implemented in Debrecen over the past years. A new tram line has been added to the city’s public-transport system. A modern sports arena has been built with a seating capacity of 20,000. Nagyerdei Park has been relandscaped along with other major municipal spaces.

We should also mention the Kölcsey Cultural Centre which offers a wide range of cultural programmes and conferences. The new network of 80 km of bike trails has provided locals and tourists with a viable green alternative of transportation and sightseeing.

The big news of 2019 was undoubtedly the BMW announcement that the German carmaker will start building its long-anticipated Debrecen plant in the spring of 2020.