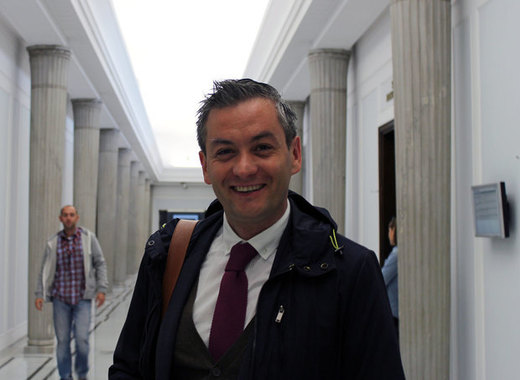 This week we take a look at Robert Biedroń – the former mayor of Słupsk, Poland

The case of Robert Biedroń is quite a curious one – if you take a look at where he stands on many issues, you would never guess he comes from Poland and you wouldn’t believe he was ever elected to any post in the country. Why? Well, for starters, he became the first openly gay member of the national assembly of Poland, after which he became the first ever openly gay mayor of a Polish city. During his mandate heading the Słupsk local government, he made it his priority to be constantly engaged with citizens, transition the municipality to more eco-friendly practices, ensure equality between sexes and cut the city’s debt significantly.

All in all – he is literally the opposite of what the current establishment is presenting. But is that actually a good thing?

The Spring of the Polish left

When finishing his term as mayor of Słupsk in 2018, Robert Biedroń had already established a decently sized following, stretching far beyond the confines of the northern city. His liberal messaging, his pro-LGBT and anti-church stances had made him stand out significantly from the Polish mainstream. He was also a member of the left-leaning parties, struggling for air in the political landscape of Poland. With the encroaching demise of the traditional centre-left party in the country, the Democratic Left Alliance, terrain was opening up for something new, something fresh – something that could revitalize society.

In comes Robert Biedroń’s political project – Wiosna, literally translated into Spring. He established it in 2018, aiming to present a fresh new approach to the tired old political landscape of Poland, with the intention of running in the 2019 EU elections and the 2019 Polish national elections.

Swimming against the current

To say that Poland’s political mainstream is overwhelmingly conservative would be a vast understatement. The intertwining of church and state, constant attempts at restricting abortion laws and rights of the LGBT community, heavily subsidizing the coal industry and refusing to sign up to more ambitious EU climate targets along with rampant Euroscepticism are just some of the everyday pastime activities of the governing Law and Justice Party (PIS). It is quite obvious however, that such an approach is heavily endorsed by the Polish rural population when they head to the ballot box – in no small part thanks to the government’s extremely generous social spending plans. As a result, the shaping of the entire state is left in the hands of people blaming European Council President Donald Tusk for a plane crash.

A conservative-leaning population combined with a historic dislike for left-leaning parties leaves very little wriggle room for anyone attempting such a venture. Robert Biedroń’s approach however was to slam headfirst into that wall, hoping to break it. And he did. Kind of. He relied primarily on the messaging that made him a mayoral superstar – eco-friendly initiatives, pro-women and LGBT rights, anti-church, very pro-EU. All in all, exactly the opposite of what the governing party has been proposing, which lead to a very decent showing in the EU elections, all things considered, winning around 6% of the vote and securing 3 seats in the European Parliament.

Robert Biedroń’s odds of success were quite low for starters. Despite his personal popularity gained during his tenure as mayor, he was still competing for the same extremely tight number of votes with other left-leaning and liberal blocs. There are only so many liberal Poles who are mainly concerned with issues regarding the environment and LGBT rights – and most of them are focused entirely in the larger urban areas. What Biedron managed to achieve however, was to consolidate said electorate within his own party, sapping the alternatives of large parts of their support, giving him a real platform on which to stand in the upcoming national elections.

During the build-up to the EU elections, the other main opposition parties had achieved a tenuous pact, establishing the Civic Platform in an attempt to outperform the ruling PIS. When they failed, the coalition disintegrated, scattering its many parties into the political winds of change. This yet again gives the former mayor an opportunity to attract disenfranchised liberal voters to his side during the leadup to the next elections in November.

Robert Biedroń being who he is could never hope to actually bulldoze the illiberal and nearly-autocratic Law and Justice regime. However, he represents a tectonic shift in the political landscape of Poland and his platform’s success is already resonating with large parts of the population. Two of the best examples being the resonant uproar against the violent attacks on LGBT activists a few days ago and the government’s slowly shifting stance on the use of coal as a response to the green Zeitgeist engulfing Europe.

While the odds might be stacked against him, if he plays his cards right in the next few months, the former mayor of Słupsk might wield far more influence in Poland than previously expected.