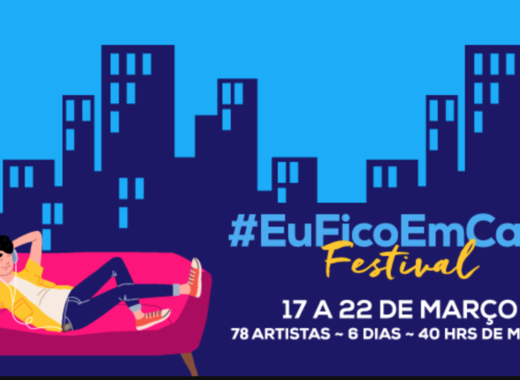 In an unprecedented move, some 80 Portuguese artists have come together in order to hold a festival from their very own homes – for one simple reason – saving lives.

After the outbreak of the COVID-19 virus in Europe, governments have been asking citizens to simply stay at home in order to save lives, protect the elderly and the vulnerable and safeguard their national health services. Yet not everyone was moved by their government’s messaging and appeals.

That is why a number of famous Portuguese artists have decided to attempt to sway their fellow countrymen in a way that the government can’t – namely by promoting self-isolation by leading by example and thus encouraging their fans to do the same.

The way they have approached this is through a massive in-house festival under the hashtag #FestivalEuFicoEmCasa – meaning “I stay at home Festival”.  It started this Tuesday and will last until Sunday and will boast daily performances by some of Portugal’s most famous cultural icons – including singers and musicians who will be performing live from their homes.

You can keep up with the events not only by following its hashtag but also by checking out its Instagram account, where the whole thing will be broadcasted. Performances start at 5 PM local time and keep going until 11:30. Participants will be taking turns – every one of them will be performing in a 30-minute segment, up until Sunday, 22 March.

The goal of the social distancing measures promoted by governments across Europe is to reduce the pace at which the coronavirus spreads and thus limit the strain on healthcare systems. That, in turn, would allow for more people to be treated effectively and would, in the end, save more lives.