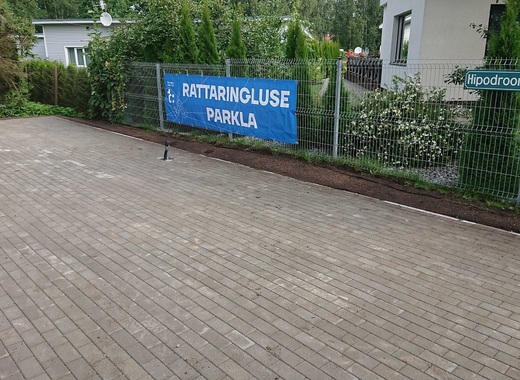 Citizens in Estonia’s Tartu have grown increasingly enamoured with cycling. Over the last few months, the city has experienced a true cycling boom as more and more locals have chosen their bikes instead of their cars and public transport, amidst the coronavirus pandemic. In light of these developments, local authorities have been eager to meet the expectations of their citizens and are adding more and more infrastructure that can adequately support the practice.

Making sure that cycling becomes more and more viable

Over the past few months, Tartu’s authorities launched their first virtual bicycle parking lots, one located near the Emajõgi River and the other by Rahinge. Their use quickly became a hit and now the local government has decided to expand the use of such virtual lots by adding one at the city’s Ihastes Hipodroomi Street, next to the Männimetsa bus stop. All the lots can be recognized easily thanks to the signage put up by officials.

In essence, the virtual bicycle parking lots are simply empty grounds that have been set aside for the storing of bikes. On-site, you’ll find none of the usual infrastructure that you might expect at such locations. Instead, you must use an additional lock to fasten your bike through the spokes. Additionally, and perhaps more importantly, bikes from the city’s circuit can now be rented and parked in the newly designated area.

By allocating additional spaces for the placing of bikes – spaces that are mandated and regulated by authorities, the city is demonstrating how innovative and new practices can be used in order to facilitate the expansion of cycling as a viable mobility alternative.