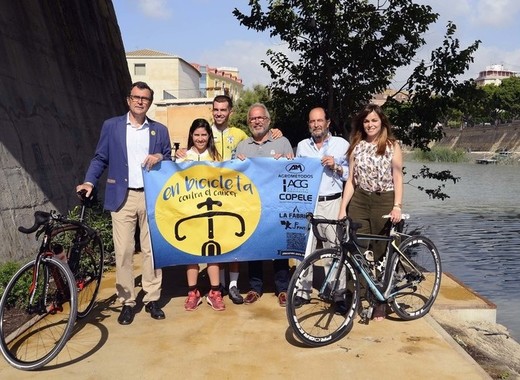 A national solidarity march ‘By Bicycle Against Cancer’ (En Bicicleta Contra el Cáncer) will cross Spain to culminate in Murcia within 7 days. After leaving from Santiago de Compostela, a seven-day trip that aims to fight against childhood cancer will be concluded on 30th August. The charity initiative collects funds for the Association of Family Members of Children with Cancer of the Region of Murcia (AFACMUR).

The tour will begin on August 24 and culminate at the Virgen de La Arrixaca Hospital on August 30. 11 athletes will start and throughout each stage, more people from all over Spain will join them. It is expected that about 30 cyclists will finish the trip in La Arrixaca, five of them from Murcia.

‘On Bicycle Against Cancer’ was born in 2017, promoted by the 28-year-old Sergio Cepeda who decided to organize a solidarity trip from Santiago de Compostela to Santiago de la Ribera and collect micro-donations through social networks, also known as ‘crowdfunding’. His goal to raise one euro per kilometre was achieved: he received a total of 1,845 euros, which were allocated to the Spanish Association Against Cancer.

The mayor of Murcia, José Ballesta, together with the Councillor for Sustainable Mobility and Youth, Rebeca Pérez, and the Councillor for Sports and Health, Felipe Coello, presented the national solidarity march. José Ballesta asserted that it is essential to give visibility to great challenges like this - a trip in which cyclists will travel more than 1,000 kilometres to fight childhood cancer.

Donations for the bike tour are made through the web at this link. For this year’s third edition the goal is to reach a total of 10,000 euros. Through the sale of nearly 200 shirts (already out of stock), about 3,000 bracelets and online donations, they have now raised more than 8,000 euros.

In 2018, Sergio Cepeda organized another solidarity trip from Paris to the University and Polytechnic Hospital of the Faith, in Valencia, which was joined by eight cyclists willing to travel the 1,600 kilometres between the cities. They managed to raise 13,281 euros, destined to the investigation of treatments for paediatric cancer patients.