The European Elections are coming! Where are we now?

Welcome to the first part of our guide to the upcoming European Elections. If you’ve been wondering who’s who and where they stand in the next European elections – this is the place for you.

The Mayor of London is introducing an Ultra Low Emission Zone

Getting to know Aveiro Tech City

The city aims to build 120,000 square metres of photovoltaic systems by the end of 2022

The new public transport operator in Nicosia and Larnaca promises a state-of-the-art system that will be safe, healthy and efficient

The system entered a testing phase on 1 July

Łódź Zoo invites children to make toys for its animals

See where they will be located

The sports event will be split with Helsinki

At the start of the next school year, citizens under 25 will be able to enjoy Brussels’ public transport free of charge

Helbiz is the first micromobility operator in the Italian city

"Electric scooters are popular in Pescara," declared the Italian Municipality on its Facebook page. After being awarded an exclusive permit by the City Hall, Helbiz is the only micromobility operator providing e-scooters to the capital of the Abruzzo region. 500 of these devices are already operating in Pescara, enjoying a positive start in the first days of their usage.

In the first two days, the e-scooters in Pescara recorded the following usage data: 3374 trips, on average 1687 per day, 70.3 per hour, calculated throughout a 24-hour period; 7236 kilometres in total, with an average of 2.14 kilometres per journey. The longest route was 7.2 kilometres, the shortest - 300 meters. According to data released by the company, CO2 pollution was diminished by 8 kg.

The Mayor of Pescara, Carlo Masci, also tried the new e-scooters. He stated: “Our administration has placed sustainable mobility and micromobility at the forefront of our agenda since we took office, and welcoming Helbiz is an important first step in embracing this cultural shift of sustainability for our city”. 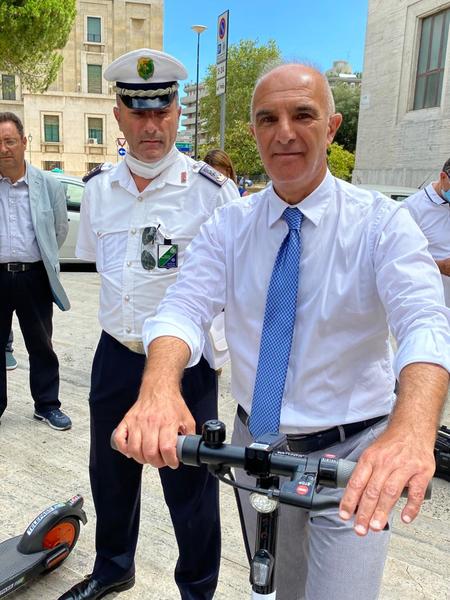 The municipal administration also clarified that, following the first days of adaptation to the new service, there will be a crackdown with respect to any incorrect behaviour. Scooters must comply with the rules that the highway code provides for bicycles, but with additional speed restrictions - 20 kilometres per hour, and 6 km/h in pedestrian areas.

Regarding the age for use, children under 14 cannot board and for minors wearing a helmet is mandatory. Furthermore, two people are not allowed together on one scooter.

Vienna equipped 400 of its trams with EU flags

On the occasion of the European Year of Rail

The event will take place online on 15-17 June

Milan and Airbnb find a working solution for ‘temporary residents’

The event will take place online on 15-17 June

Netherlands allows holiday travel to safe countries from 15 May

The goal is to inspire a grassroots movement, it remains to be seen if this will be the case

Commissioner Gabriel: The New European Bauhaus is a project for all regions and territories in Europe

An interview with the Mayor of Mislata, in Spain

An interview with Gertrud Maltz-Schwarzfischer, mayor of Regensburg, Germany

An interview with the mayor of Herzogenrath, Germany

Netherlands allows holiday travel to safe countries from 15 May

Milan and Airbnb find a working solution for ‘temporary residents’

Vienna equipped 400 of its trams with EU flags

Flight Pass tantamount to Safe Pass for tourists in Cyprus

House of Digitisation: an interactive platform for SMEs in Lower Austria