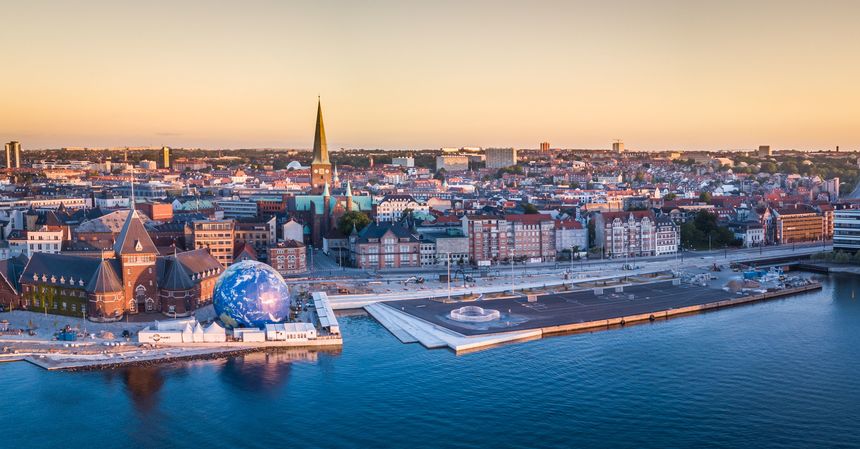 The original city grew up around the mouth of the Aarhus river. Here the Vikings decided to settle in the 8th century because of the location's excellent potential as a harbour and trading position. The Danish word for "river mouth" was at that time "AROS", and this is the word from which "Aarhus" of today originates. During the Viking Age a cluster of houses along the river constituted a small urban community encircled by an earthen rampart and a moat.

In 1201 the foundation stone for the Cathedral was laid, and the city started to expand outside the original area. During the Middle Ages until the Reformation in 1536, it was the urban life around the cathedral which was the central element of the town. After the Reformation the large merchants' houses gradually began to form the pivotal point for life and trade in the town.

In 1847 a major expansion of the harbour was begun. This work was completed in 1861 which coincided with the opening of the first section of the railway line in Jutland between Aarhus and the town of Randers in 1862. Aarhus thus became an important centre for goods and transport, thereby forming the basis for the development of the city into Denmark's second-largest city with the country's second-largest harbour.

Today Aarhus has a population of approximately 300,000 inhabitants, a very active business community, a vibrant educational environment consisting of a number of different institutions of higher education, including the University of Aarhus.

The economy of Aarhus is predominantly knowledge and service-based, strongly influenced by the University of Aarhus and the large healthcare industry. The service sector dominates the economy and is growing as the city transitions away from manufacturing. Trade and transportation remain important sectors, benefiting from the large port and central position on the rail network. The municipality is home to 175 000 jobs with some 100 000 in the private sector and the rest split between state, region and municipality. The region is a major agricultural producer, with many large farms in the outlying districts. 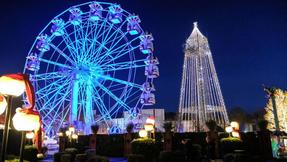 The ARoS Art Museum, the Old Town Museum and Tivoli Friheden are among Denmark's top tourist attractions. With a combined total of almost 1.4 million visitors they represent the driving force behind tourism but other venues such as Moesgård Museum and Kvindemuseet are also popular. The city's extensive shopping facilities are also said to be a major attraction for tourists, as are festivals, especially NorthSide and SPOT.