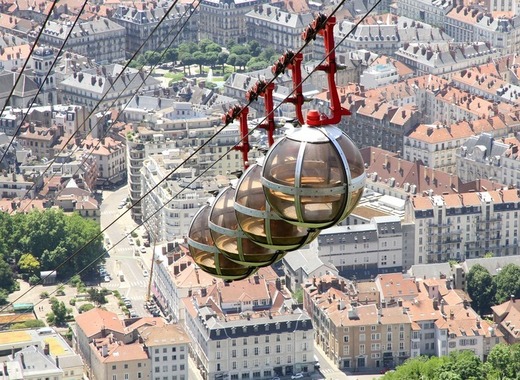 It is now official – Grenoble (France) will hold the European Green Capital in 2022, while Gabrovo (Bulgaria) and Lappeenranta (Finland) are the winners in the European Green Leaf 2021 category for cities with less than 100,000 inhabitants. The results were announced at yesterday’s official ceremony in Lisbon, this year’s Green capital, by Commissioner Virginijus Sinkevicius (Environment, Oceans and Fisheries).

Grenoble impresses with high results across all indicators

The winners in the competition organised by the European Commission were selected by an expert jury based on their commitment to sustainable development evaluated against 12 indicators. The finalists were announced back in May when two French cities – Dijon and Grenoble, together with Tallin in Estonia and Turin in Italy were shortlisted in the Green Capital competition. Five towns and cities made it to the finals in the Green Leaf contest (20,000-100,000 inhabitants) - Elsinore (Denmark), Gabrovo (Bulgaria), Lappeenranta (Finland), Nyborg (Denmark) and Ringkøbing-Skjern (Denmark).

Now the wait is over, and the names of the big winners are known. They will not only receive the prestigious recognition for their environmental protection achievements but will also get a financial stimulus to start their “green years” – 350,000 euros for Grenoble and 75,000 euros for Gabrovo and for Lappeenranta.

Grenoble impressed the jury in many aspects – the table below testifies to its solid results, as the French city ranked first in 5 of the 12 indicators, 2nd in 6 of them and 3rd in one:

Technical ranking of the Finalist Cities for the European Green Capital Award 2022. Source: City of Grenoble

What follows for Grenoble is a year full of interesting and inspirational events and initiatives in the field of sustainable development. Its year as a green capital will take the shape of a program chock-full of meetings for all audiences. The title of European Green Capital is an opportunity to strengthen the attractiveness of the territory, to speed up transitions and to make the territory more resilient to climate change.

“It is an honour for us to follow all former Green Capital Cities. We all need to adapt our way of life and I am sure that being a European Green Capital will help us to go further. We will be demanding and proactive ambassadors!”  said the Mayor of Grenoble, Éric Piolle upon receiving the award.

As for the smaller urban settlements, the rules of the competition allow for two winners. According to the jury, the city of Lappeenranta has made a visible commitment to developing climate work. The city aims to achieve carbon neutrality by 2030.

As for Gabrovo, the title was decerned for its achievements in energy efficiency, the improvement of the urban environment, the benefits in public transport, separate collection of waste and campaigns with the inclusion of citizens.

"This success is the result of the work of my team and all the people who work for the green transformation of the urban environment in Gabrovo. We believed that we deserved the award and we were happy that our efforts were highly appreciated. We hope that in the future we will have a chance to share our ideas and projects with other cities in Europe," Mayor of Gabrovo Tanya Hristova during the award ceremony.