The earliest remains of significance found in L'Hospitalet date from the 4th century BC and refer to the Iberian culture, although evidence of human presence during the Paleolithic and Neolithic has been found in the valley of the Llobregat river. Also, numerous remains testify to the presence of the Romans from the 2nd century BC.

However, it is not until the 10th century that the term Provençana (original name of the municipality) appears in written documents. At that time, the limits of the territory extended to the north to the Collserola mountain range and the municipality of Esplugues; to the east, to Sarrià, Sants and the port, and to the west, to the river Llobregat.

The origins of present L'Hospitalet are in the two nuclei that appeared during the 12th century around the church of Santa Eulalia de Provençana and around the Hospital de la Torre Blanca.

L'Hospitalet was a traditionally agricultural town until the end of the 18th century, when the first textile mills were installed. At the beginning of the 20th century, the city experienced a great industrial development and a spectacular population growth. On December 15, 1925, King Alfonso XIII granted it the title of city.

Between the years 1960 and 1970, during the Franco dictatorship, L'Hospitalet saw its population increase dramatically. Citizens from all over Spain settled in the municipality that became second in Catalonia in number of inhabitants. However, the city was not provided with means to meet the demands of so many citizens. There were no schools or public facilities, no parks or green spaces. Citizens soon began to take to the streets to claim better living conditions. Since then, the name L'Hospitalet has been synonymous with the struggle for a worthy city, with solidarity with those who need it and with those who seek a better future.

With the return of democratic councils in 1979, the city started to change. The streets were urbanized, new services were created, schools, sports centres, markets, cultural centres and parks were built. Once the basic needs had been met, L'Hospitalet began its second major transformation in the late 90's, becoming a modern municipality, attractive for new economic activities, with more and better transport and services, a centralized municipality in the metropolitan area of ​​Barcelona.

Spreading across 12.49 square kilometres, the city of L'Hospitalet is located on the left bank of the river Llobregat, on the coastal plain between the municipalities of Barcelona, ​​Esplugues, Cornellà and El Prat. Administratively, L'Hospitalet belongs to the Catalan region of Barcelonès and is divided into 6 districts and 13 neighbourhoods.

L'Hospitalet is the second municipality in Catalonia when it comes to the number of inhabitants, with 269,903 citizens (December 31, 2018)

L'Hospitalet is the second biggest driving force of the economy in the region of Catalonia. Over the last few years, L’Hospitalet has been developing its Economic District around Granvia.

In the last decade the municipality reinforced the development of the L'H Cultural District, which attracts artists and companies associated with Cultural and Creative Industries (CCI) and laid the foundations for the development of an important biomedical research hub at Hospital de Bellvitge. 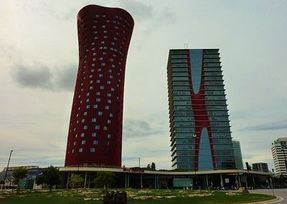 L'Hospitalet's excellent location within the Barcelona metropolitan area, halfway between Barcelona's El Prat airport and the Catalan capital itself, has converted the city into a hub of first-class services.

The city has 18 top-class hotels, providing 2,000 rooms. It is one of the top 10 tourist destinations in Catalonia, boasting a hotel infrastructure that meets the demands of business tourism, linked to the activity of La Fira; leisure tourism, owing to the city's proximity to Barcelona; and sports tourism.