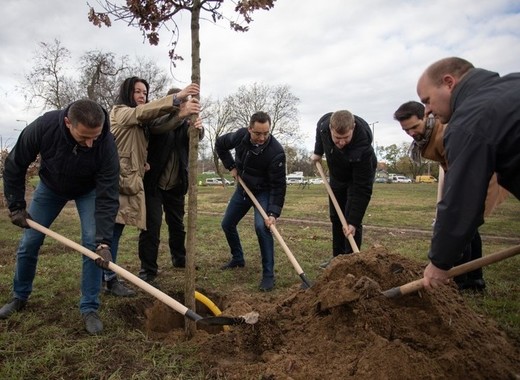 The high level of air pollution is one of the biggest environmental problems in Debrecen, the second largest city in Hungary. A particularly harmful effect on air quality has the burning of solid fuels, green waste, and garbage to heat homes in autumn and winter.

Addressing this problem in a sustainable way, Debrecen city council launched the program ‘Debrecen, our garden’ in April 2019. The outcome of this unprecedented initiative, a joint effort of Debrecen Municipality, locals, companies, institutions, NGOs and friendship societies, was that a total of one thousand trees were planted in all areas of Debrecen by this December.

The 1000th tree was planted by Mayor László Papp in a year-end push during which 50 oaklings were planted in Wesselényi district.

During the event Mayor László Papp said, quoted by Debrecen.hu: „We are committed to preserving the environmental values of Debrecen, as well as to the cleanness of public areas. At the launch of the program ‘Debrecen, our garden’ in April, we set goals for renewing urban green areas: parks and avenues, and we targeted afforestation as well. We have planted 50 oaklings in Wesselényi microdistrict. We have placed the saplings in a way that – when they grow up – they should provide shelter for the residents of the area against particulate matter. We planted trees in all districts, and we shall put 10 thousand saplings in the ground in the next 5 years. Through intensive afforestation, we intend to improve the air quality. We wish to leave healthy environment for the upcoming generations here in Debrecen. With this in mind we will create the environmental strategy of Debrecen.”

Nature in the city

Debrecen is the indisputable commercial, administrative, cultural, and educational center of Eastern Hungary. Behind its business clout (with the construction of a huge BMV plant set to begin next spring) Debrecen has never been too far from nature. The nation’s first designated conservation area, the Nagyerdő neighborhood, is home to Aquaticum Health & Spa Center, which utilizes the region’s rich deposits of thermal water. And only a half hour-drive from the city center is Hortobágy National Park.